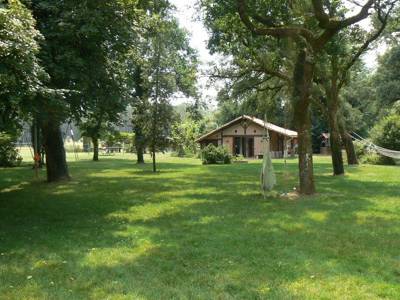 Quaint family camping in the tree-speckled land around a 100-year-old farm house
South-west France is made up of a number of diverse and independent regions; from wine-growing Bordeaux, to the beach-lined Atlantic seaboard, and the Pyrenees mountains in the south, “breathtaking” is an exhausted term that can be fairly applied here. But somehow attention-grabbing adjectives are not quite enough, and to set eyes upon this part of the world for the first time may quite literally take your breath away. Nestled covertly in the heart of the Landes Forest and close to the natural lakes of Aquitaine is Camping Du Toy, the campsite of your dreams.

Welcoming and knowledgeable owner Vincent has been behind the helm here for more than 30 years, so it’s fair to say he knows a thing or two about running a successful campsite. Carving out just 35 pitches of this beautiful locale, Vincent's privileged campers have a choice of pitching up in either the sun or the shade. A charming French farm building houses the site's immaculate showers, sinks, and toilets. Keep your eyes peeled; plenty of onsite oddities are waiting to be discovered including: original mosaics, sculptures, and tree-carvings, all lovingly created by Vincent’s fair hands!

A major pull of south-west France is the amount of day-trips on offer. Known for its neo-classical architecture, Bordeaux’s wide avenues, word-class museums and un-touristy atmosphere, make Aquitaine’s capital so much more than just a convenient stop between Paris and Spain.

Back at Camping Du Toy, guests gather around the large communal kitchen and get to grips with some of the region's famously fine cuisine, including goose liver, duck breast and asparagus. Du Toy also caters perfectly for children with a great onsite play area. There’s space and facilities to play football, volleyball, tennis, badminton, trampoline, and not to mention all the fun and exploring that can be had around the site's long grass, hedges, and tall trees.

The Aquitaine region is one of France's most historic and varied. It is also arguably the nation's most famous wine-producing region with the area surrounding regional capital Bordeaux (about 1hr 45min drive away) being home to miles of iconic vineyards. Just north of Vieux Boucau, the beautiful beach at Messanges is only about 25 minutes drive away from the campsite. Its undulating white sand dunes and crashing Atlantic waves attract scores of families and surfers. The pretty village of Soustons is one of the true jewels in the Landes' crown. Surrounded by ancient pine forests. the famous Lac 'Soustons is perfect for sailing, kayaking, windsurfing and swimming. Further afield, the quaint town of Luxey (about 1.5 hours drive from Camping du Toy) gets mobbed for 4 days every August when music lovers the world over descend for the annual Musicalarue. Also in August, the Feria de Dax takes place in the famed south-west spa town (9 miles away). Highlights include concerts, bullfights and fireworks.

The onsite barbecue house is accessible to all campers. There is also a communal kitchen with gas stove and oven as well as 3 fridge/freezers which can be used for a small fee. Starting from summer 2015, baguettes, chocolatines and croissants will be offered for breakfast. A small restaurant is open in the evenings where campers can chose between one or two meals. You can also buy small meals to go. Herm (1m away) has a restaurant, bar and small supermarket. There is a larger supermarket at Castets (4m) while Magesq has a couple of fine-food supermarkets. Dax also hosts a traditional farmers’ market every Saturday.

March–October, reservation only required from 15th July til 20th August

Welcome to the south-west of France! My name is Vincent Fabas and I've been running this campsite for more than 30 years. The main building is a some hundred years old farm house and serves as appartment and reception building. It has mainly been left in its primitive estate. Round it my family and I have been enlarging the area to some wonderful campsite since the 1980ies. There are rolling paths through the nice pitches and shady cork oaks, oaks and pine trees, which are typical for this region. Besides you also find more exotic plants like bananas, olives, eucalyptuses, camelias or bamboos and a nice kitchen garden behind the farm house. Because of the great childrens playground the campsite is very popular with families. For young and old there are occasions to play boule, badminton, volleyball, football, table-tennis or to have a barbecue at our barbecue house, which is accessible for all campers. If you prefere a loner and quieter pitch, we have also enough place for you. The Toy gains its special flair not only by its beautiful plant arrangements, but also by the different mosaics, sculptures or carvings I fabricated mostly by myself to decorate the sanitary facilities and the area. Have a look at my photos. I look forward to your visit at the Camping du Toy!

Taking the N10 from Bordeaux to Biarritz, exit at Castets. You will reach a roundabout. Take the first exit "Z.I. Cazalieu" and follow the road a while. From here you will find signs directing you to the campsite. 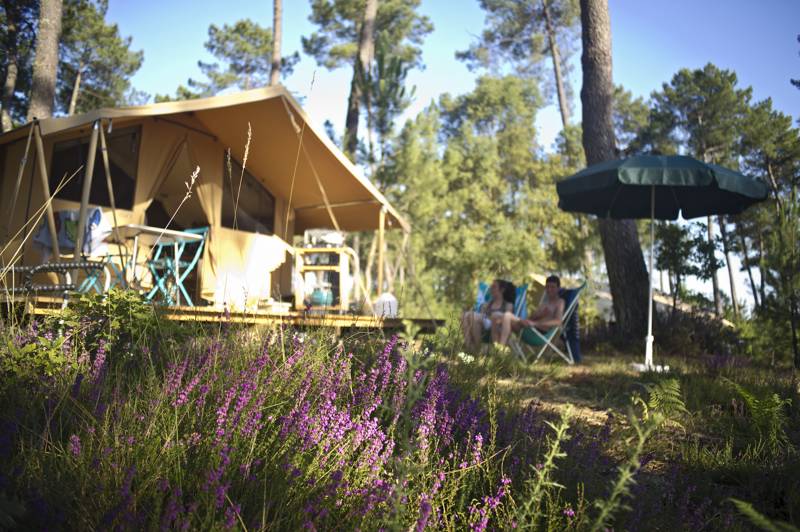