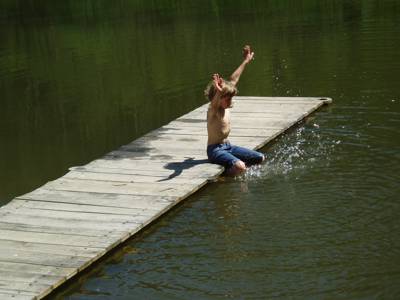 Wild yet well organised with a fantastic location

Uzerche isn't known as 'the pearl of the Limousin' for nothing. It’s cluster of ancient, turreted buildings, clambering up towards the steeple of its hilltop church, creates one of the most scenic townscapes in all of France, while the languid pace of the river Vézère imbues a sense of calm and serenity across the entire settlement. Slithering around the town in a tight loop, it’s as if the river has squeezed the old centre upwards, the grey-stone buildings crowning the surrounding valley with their spikey rooftops and rows of classical arches.

Were you to climb the church tower and peer from the narrow windows, it would be a struggle to pick out the neighbouring village of Condat sur Ganaveix. Though just six kilometers away, the flanks of trees and numerous shallow valleys disguise it among the countryside, but it’s on the edge of the village, nestled among such lush surroundings, that Camping Moulin de la Geneste is found.

Spread across 10 acres but with only around 45 camping pitches, Moulin de la Geneste is a country campsite as naturally suited to its surroundings as the birds in the trees and the trout in the river. Much of the site is made up of unmanaged pockets of woodland and long grasses, while three specific camping areas provide space where tents can be pitched or motorhomes parked up for the night. The attitude is pretty relaxed. Events are suitably spontaneous and homemade – be it floating candles on the lake, a treasure hunt, story telling in the fairy garden or feeding and brushing ponies – but there are plenty of happy constants to keep you busy through the day. Boules and basketball courts entertain in the warm summer evenings, while managed footpaths lead you through the trees by day, to quiet picnic areas and streams perfect for kids to dabble and splash about during the midday heat.

When you do head elsewhere, though, there is plenty to do. Uzerche itself has a wealth of important heritage – the central abbey is a sign of its pinnacle of influence during the 1100s and the surrounding fort-shaped buildings that were a style of the time have led to the French saying “He who owns a house in Uzerche has a castle in the Limousin”. It’s not a place of fast-paced, fist-pumping modern life, of course, (though join the local canoe outfitters and you’ll certainly find some speed on the downstream rapids) but for a little casual exploration there are few better spots – it’s as if the town were tailor made for aimless ambling.

When you slide your rook across the chessboard back at Camping Moulin you can’t help but feel the timelessness of the whole area: The beautiful Limousin, its mature woodlands and ancient settlements, and the age-old beauty of camping out beneath the stars. “Beware”, their website warns, “You may find yourself staying longer than you planned”. It’s not a counsel to be taken lightly.

2 shower blocks with 5 separate showers, 5 separate toilets, 1 disabled room, 1 baby/family room, 4 sinks in cubicles, 2 sinks out of cubicles, 1 urinal, 2 washing up rooms, 2 washing machines and 1 caravan/MH cartridge waste. There is free WiFi at reception and communal fridges in the shower blocks. The trout river and large lake are well stocked with fish and the lake has two small rowing boats and canoes for use. Kids will love the positive menagerie of animals, including ponies, goats, pigs, chickens and the owners three buoyant springer spaniels. There's a boules pitch, table tennis, basketball net, small football area, badminton, two outdoor chess tables, an adventure playground and donkey hire/trekking. There is also a fantastic 'fairy garden' with a  wishing well, chimes, tree swing and hidden fairies for children to find!

Everyone's welcome, including dogs (although they must be kept on a leads).

Uzerche is a charming town to stroll with its inviting centre and Friday market brimming with the finest Limousin produce. For something a little more adrenaline-fuelled, visitors can take to the Vézère with some white-knuckle canoeing with trained instructors Base de la Minoterie (0033 555 730 284).
Pompadour equestrian centre (0033 555 985 547) is the place to go to admire some of France's master riders at work. If chateaux are your thing, Segur-le-Chateau (22km away) – le plus beaux villages de France – is well worth a visit. When the heat becomes too much, head to one of the region's stunning lakes at Bournazel or Teignac – there's a diving board at the former and pedaloes at the latter.

There's a bread delivery from the local boulangerie every day during July & August, so campers can have a basket of freshly-baked baguettes delivered to their pitch before 9am. A local farmer also visits selling locally-grown fruit and veg. There's always a small stock of food in reception, plus beers, wines and ice creams. Once a week, the site host an authentic Indian feast for all campers. Uzerche boasts several excellent eateries including La Table de M (0033 5 55 98 17 80), Hôtel Joyet de Maubec (0033 5 55 97 20 60), Brasserie Vézère (0033 6 51 64 40 48).

April – end of October for camping. All year round for the chalets. 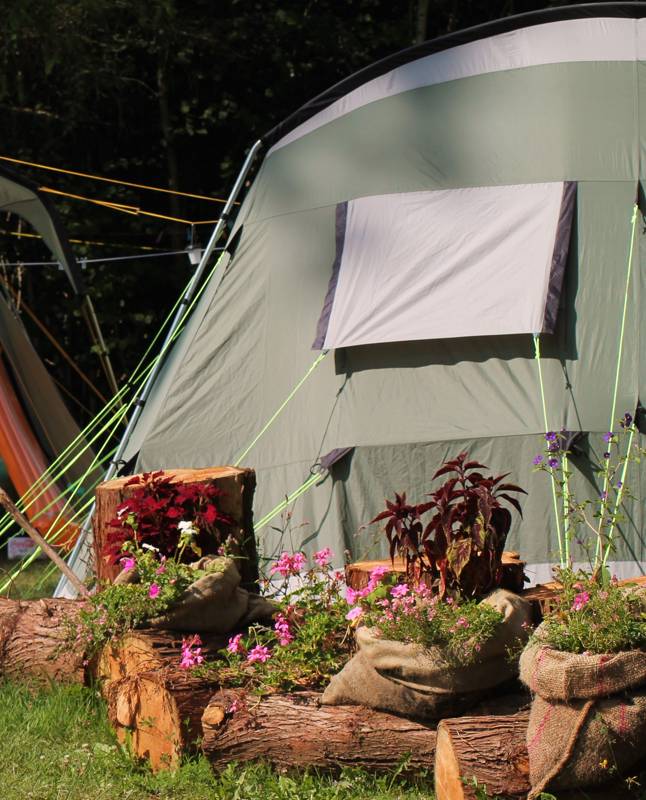 i
Our camping areas can accommodate all types of tents, caravans and motorhomes with pitches upto 160sqm. 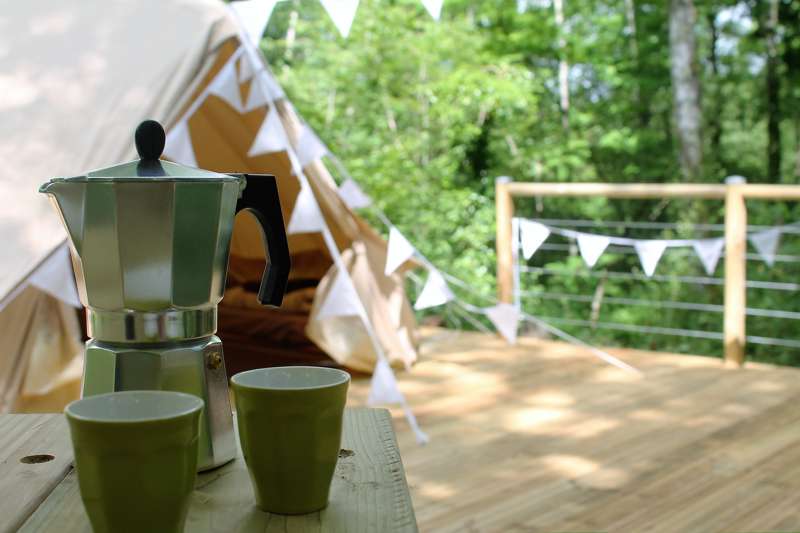 i
Book this bell tent and enjoy your meals outside on your own large spacious decking area, fitted with a summer kitchen with a gas hob, picnic table and barbecue.

Bell tent Sleeps 4 2 Available
Book this bell tent and enjoy your meals outside on your own large spacious decking area, fitted with a summer kitchen with a gas hob, picnic table and barbecue.
Select Dates or Read More 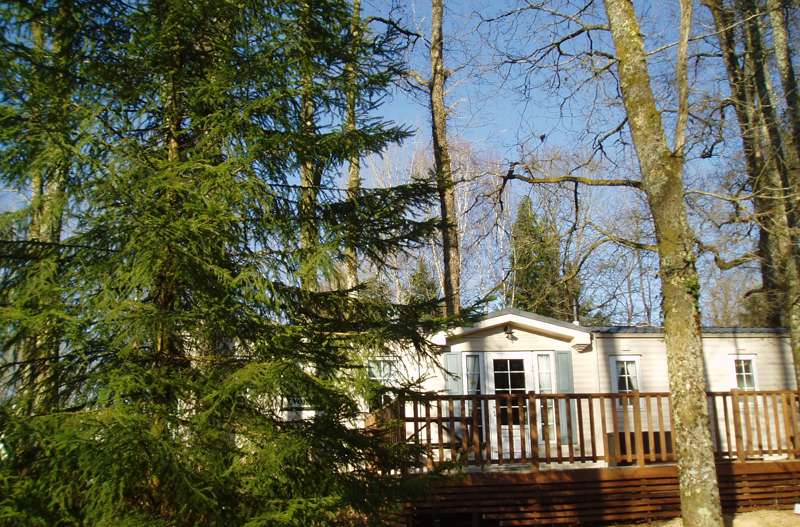 i
Our Mobile Home can comfortably sleep 6 people. It has one double bedroom with en-suite bathroom and also a twin bedroom both fitted with wardrobes and dressing tables. Spend your evenings sitting on your own private decking eating or enjoying a glass of wine.

Static Caravan Sleeps 5
Our Mobile Home can comfortably sleep 6 people. It has one double bedroom with en-suite bathroom and also a twin bedroom both fitted with wardrobes and dressing tables. Spend your evenings sitting on your own private decking eating or enjoying a glass of wine.
Select Dates or Read More 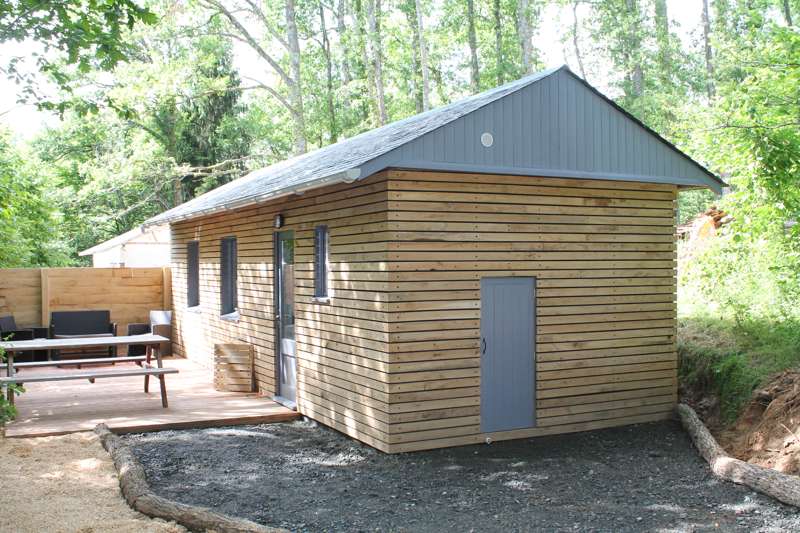 i
This Chalet is the perfect getaway for you and the family, with modern furniture throughout it can comfortably sleep up to 6 occupants. The main living space has a handmade oak kitchen including a microwave, coffee machine. The living room has a DVD player and a cosy wood burner.

Cabin Sleeps 4 2 Available
This Chalet is the perfect getaway for you and the family, with modern furniture throughout it can comfortably sleep up to 6 occupants. The main living space has a handmade oak kitchen including a microwave, coffee machine. The living room has a DVD player and a cosy wood burner.
Select Dates or Read More
Show more
Check Availability

You need to exit the A20 motorway at junction 44 if heading south. At the first roundabout go directly ahead signposted Uzerche. After approximately 3 km's there is a crossroads.  Take the left turn to Condat sur Ganaveix. Continue on this country road straight into the village approximately 4km. Whilst on this road you will cross over a railway bridge, continue straight ahead until you come to a T junction with a church opposite. Turn right. Take the second left turn (fork left) signposted Eyburie, Moulin de la Geneste and there is also a campsite sign. Continue for 2km, you will cross a small stone bridge over a river (and see the naked ladies!), do not turn into the first property but continue gently uphill for another 200 metres and Moulin de la Geneste is the next property (with large white gates).

The nearest train station is Uzerche, on the main Paris – Toulouse line. The nearest airport is Limoges, 45 minutes drive from the campsite. You can get direct flights from most UK airports. 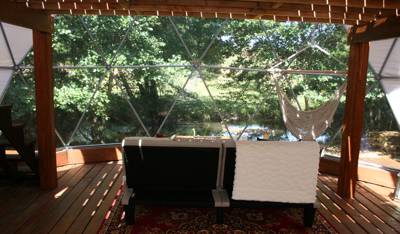