A family-camping paradise in the Maritime Alps... with its own private lakeside beach!

If the French Alps boast some of Europe's most awe-inspiring scenery, then the Maritime Alps in the country's remote south-east corner are truly a sight to behold. The southernmost tip of this mighty mountain range, the Maritime Alps straddle the border between L'hexagone and the Italian regions of Piedmont and Liguria. This epic landscape is a stunning picture of lush, craggy mountains and vast gorges scything the valley in two, bejewelled with sparkling lakes. And surveying this breathtaking vista, beside one such lovely waterside scene, you will first lay eyes upon one of the region's most enviably-located campsites.

Managed by wonderful, English-speaking hosts Clare and Eric Rondeau, Camping du Brec is 7.5 acres of idyllic family-camping paradise. With a mixture of shady pitches catering to tents, campervans and caravans (as well as the obligatory French camping bungalows), it's big on facilities, though with a refreshingly uncommercial presentation.

Navigating the serpentine roads that snake their way round the meandering River Var, arrival at Camping du Brec is akin to finding an oasis (just... ahem... substitute undulating sand plains for verdant, pine-strewn mountainsides). For the jewel in du Brec's already resplendent crown is the gorgeous lake and beach. A hive of swimming, fishing, canoeing, and general aquatic escapades, the private lake is the focal point for campsite life – helped in no small measure by the lakeside bar.

As if this lakeside locale wasn't enough, Camping du Brec is also mere minutes from some of the best southern France has to offer. There's the sprawling Mercantour National Park (home to wild boar, golden eagles, and wolves); the heady vineyards and perfumed lavender fields of Provence; the picture-postcard town of Entrevaux – its citadel a marvel of medieval construction. It's also not too far from the glamorous Côte d’Azur (though a million miles away in terms of pretentiousness).

Natural wonders really show off here; Le Gorges de Daluis, Lac d’Allos – there's an epic scale to everything. And for those brave (or foolhardy) enough, there’s always cycling the Col de la Bonette, Europe’s highest road and the bane of the world’s greatest cyclists during the Tour de France.

However you choose to spend your break, just let the invigorating mountain air, a panacea for all the ills of modern living, do its thing. And as the sun descends over the surrounding mountains, and you kick back with a beer on the lakeside terrace as the glinting rays dance on the gently-lapping waves, you'll be glad you navigated those winding Alpine roads.

2 shower blocks with ample toilets, showers, washing up sinks and separate clothes washing sinks. A baby room has a bath and shower, while the newer of the 2 blocks has disabled facilities. Washing machine and dryer (€3 each). Ironing board and iron available at reception. Caravan/camper service area. Freezers for ice packs; Wifi connection on 80% of the site (€1 for 24h); Computer with free internet connection at snack bar; European electrical adaptors can be borrowed from reception; Hiking maps and guides can be borrowed from reception; Table tennis, boules and badminton rackets etc can also be borrowed; Fresh bread service running from Easter to end of September and 2 communal wood BBQs available for use.

Tents, campervans, caravans (not double axel), well-behaved dogs – yes. Groups are welcome during the low season but must make prior contact for group rates and availability (no stag or hen weekends).

The site is an ideal base for all manner of outdoor pursuits and, at reception, you can organise rafting, canoeing, kayaking, canyoning, via ferrata and climbing trips all organised by the campsite. Nearby Entrevaux is a charming medieval town with historic citadels and castle ramparts. You can also hop on the lovely old restored steam locomotive and explore this stunning region at a more leisurely pace. An hour's drive away lies the Mercantour National Park (0033 492 81 21 31), with peaks reaching 3000m and the Lac d’Allos, the largest natural high-altitude lake in Europe. The famous Gorges du Verdon is also around an hour away. The 14km Martel Trail follows the course of the river Verdon, taking in some of the country's most stunning scenery. Make easier work of it by setting of from Chalet de la Maline.

There's an onsite snack bar overlooking the lake which serves draught beer, hot and cold drinks, ice creams and light snacks (salads, paninis, chips etc). There's a choice of restaurants in Entrevaux (1.5 km away), among which Auberge du Planet (0033 493 054 960) serves traditional French cuisines as well as pizzas. In Annot (8km), the ever-popular La Table d'Angele (0033 492 838 850) serves a tasty menu of and regular plat du jour. For local delicacies, be sure to sample some secca de boeuf – a dried slated-beef speciality patented in Entrevaux. The region is also famous for it's apple juice – a great accompaniment to the region's famous sweet pain d'épice (ginger bread). There's also a well-stocked supermarket less than 2 km away for any provisions.

From Nice: Follow the RN 202 (RD6202/M6202) direction DIgne-les-Bains for about 70-75 km until Entrevaux. Drive past Entrevaux. Stay on the same road for approx. 4km until you cross the Var River over a bridge. Immediately after crossing the river turn right down a side road (signposted Camping du Brec, Intermarché). Drive to the end of this road (approx. 2km). The Camping du Brec is at the end.

From Digne: Take the RN 85 direction Nice for approx. 17 km until Barrème. At Barrème take the RN 202 direction Nice. Approximately 4 km before Entrevaux and before crossing the Var River over a bridge, turn left down a side road (signposted Camping du Brec, Intermarché). Drive to the end of this road (approx. 2km). The Camping du Brec is at the end. 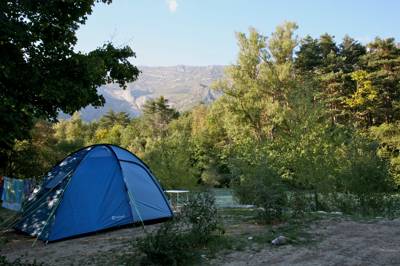