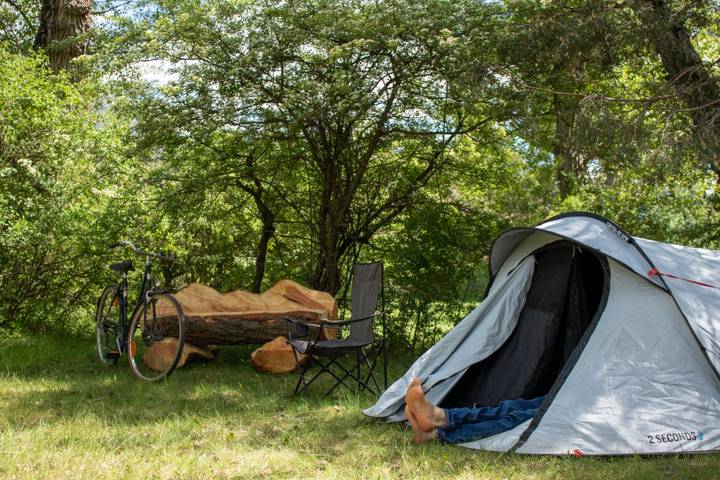 It was back in the late ‘60s the Miollan family first thought about opening a campsite on the banks of the River Durance. Their woodland plot was light enough to provide space for tents, campervans and for cars to make their way through the trees, but dense enough for ample shade and a real sense of wilderness. By 1970 the site was open for business and backpackers were trickling in. This was the land of the outdoorsmen. A place for kayaking, rock climbing, hiking and cycling. And today, while the gear may have moved on – the tents are a far cry from what they were in the ‘70s and cyclists arrive on carbon road bikes – the campsite remains just as magical.

Set among some eight-and-a-half acres of trees, Camping La Cabane has flourished into an established alpine campsite while still retaining its natural feel. While amenities are ample, there are no noisy ‘animations’ or kids clubs – why lay on activities when there’s so much on the doorstep? The two washblocks have very decent showers, there’s covered storage for bikes and, at reception, there are brochures and local information aplenty. A small shop also accompanies the main desk, so you can buy any essential groceries (as well as homegrown fruit and veg) and, like any self-respecting French campsite, croissants and fresh bread can be ordered for the following morning.

In total there’s room for around 60 tents. Campers can choose from pitches close to the amenities or more hidden spots further into the trees. For those with a particular sense of adventure there is also the option of sleeping suspended from the canopy. In 2018, a pair of Pendola tree tents were winched up into place to hang from some particularly sturdy trees. Inside, you sleep in a double bed, rocked to sleep by the breeze as if in nature’s most gentle cradle, while, outside, one of the two tree tents is also accompanied by a raised deck where you can dine with elevated views.

The woods themselves follow a curve in the River Durance as it makes its way south to join the Rhone, carving a divide between two alpine massifs – the Ecrins mountains (now a national park) to the west and the Queyras to the east. It’s a setting to raise the heart rate of anyone who loves the outdoors. Several of the best known rock climbing areas are found between Saint-Crépin, Réotier and Mont-Dauphin, while kayaks, strewn beside numerous tents at the campsite, suggest the river is excellent for paddling. To the south, 1,850-metre-high Risoul re-opens chairlifts in summer to take hikers and mountain bikers up to the highest levels (peaks of 2,500 metres), while the pretty fortress at Mont-Dauphin provides a dose of history and culture. None of it is more than 10km from the campsite.

2 washblocks, which, between them, have 10 showers, 13 sinks and 15 toilets, plus a separate disabled-access shower. 16 washing-up sinks plus 3 for washing clothes (there is also a washing machine and ironing board). Outdoor fun includes a trampoline, table tennis, slack line, tree climbing and garden games, while, inside, there is a games room with a TV, boardgames, books and magazines and a table tennis table. There's also a communal canopy/tent for relaxing in. At reception you can buy a small variety of groceries – ice-cream, fresh vegetables from the garden, local beers, wine, cleaning products for washing up and so on. No campfires, but BBQs are permitted.

Welcome the the mountains. In a setting like this you're never short of things to do. Stretching from the west of the campsite is Ecrins National Park, while, to the east of the campsite is the Queyras Regional Natural Park. Rock climbing, via ferrata, mountain biking and, of course, hiking are all popular locally, while, if you want to make things easier, it's a half-hour drive (lots of switch-backs at the end) up to the lift station in Risoul (1850 metres). The chairlifts, initially erected for skiing, open again in the peak summer season and can be used for around €6 a pop or €20 for the day. They open up 70km of marked trails for hiking and mountain biking and let you get some initial height without the hard work. If you want to earn your very own polka dot jersey, the roads make for unbeatably hilly road cycling too. In Eygliers (a 10-minute drive), you can easily arrange kayak hire and stand-up paddle boarding on the river (it's also a good spot for river swimming) and there are municipal swimming pools in St Crépin and Guillestre. It's not all about breaking a sweat, though. If you fancy a little culture there are a couple of UNESCO-protected villages, fortified by Vauban in the 17th century, nearby – Mont-Dauphin (10–15 minutes) and Briançon (30 minutes). It's also 40km to the village of Saint-Véran (50 minutes) – reputedly the highest village in the whole of Europe (2,040 metres).

It's a 15-minute walk into the village of Saint-Crépin. Les Tables de Gaspard (+33 4 92 24 85 28) is worth every penny. The food is good and the setting is as atmospheric as they come, stepping down in a vaulted, 16th-century room with seating for around 20 people. The completely unassuming exterior makes it all the more of a surprising find. There's a decent pizzeria (+33 4 92 45 36 06) too and a bakery further into the village. For a decent-sized supermarket, drive the 10–15 minutes to Guillestre.

The nearest SNCF train station is just 4km away in Mont-Dauphin Guillestre (5–10 minute drive). From there, get on any train that mentions Briançon and hop off in Saint-Crépin. 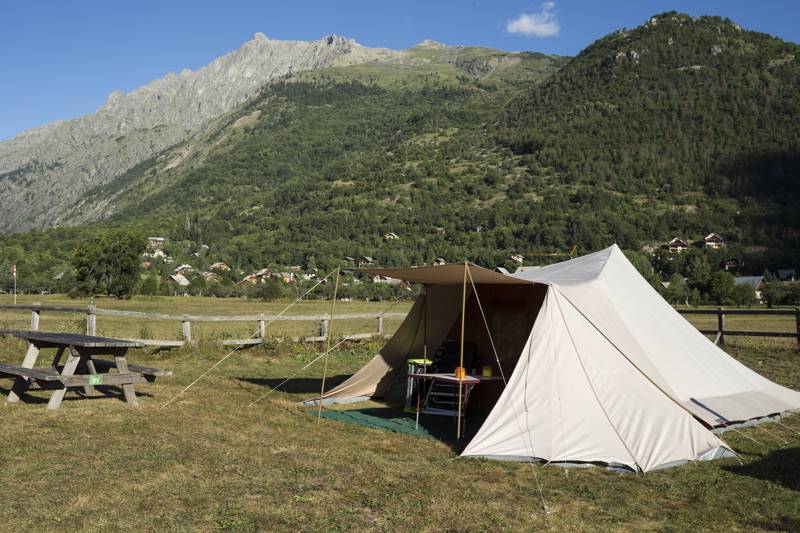