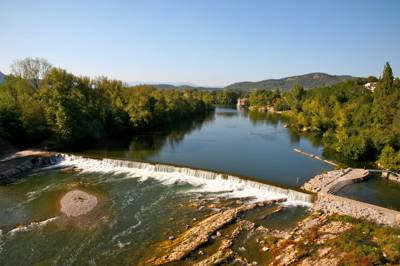 Right on the Ardèche river with itsown private beach: killer

Le Clapas might sound like the kind of thing you’d do to a Ricky Martin track – but ‘clapas’ is actually an old Occitan name for a pile of stones – or a building made from a pile of stones. In the case of Camping Le Clapas, the stones come from a beach slap bang on the Ardèche river – the robust rivulet that forged the beautiful gorges found in this area and which gave the département its name.

A former municipal spot, Le Clapas was taken over sometime around 2005 and transformed into something a little more special. Trees were planted, small walls were built using the eponymous stones, which still line the river banks and the site’s private beach. Plus, the facilities were tweaked and expanded to make the site more cosy, imaginative and comfortable.

You’ll find the 67 decent-sized pitches beneath a swaying miscellany of acacias and pines, and many (though not all) offer views of the Ardèche. It’s a family-friendly place, with boules, table tennis and volleyball on offer and regular group entertainments, such as BBQs, themed evenings and karaoke. The adults are catered for too, with a small but well-stocked on-site bar.

Thanks to the river, canoeing and kayaking are big draws here. And, there is something for everyone – gentle stretches for beginners, and drifters and feisty rapids for the adrenaline fiends. Le Clapas works in partnership with a local tour operator to arrange canoe and kayak tours for individuals, groups and families that leave directly from the site; these range from a leisurely 5-mile (8-km) paddle to a more strenuous 20-mile (32-km) trip.

If river-related shenanigans don’t grab you, there are plenty of other diversions. The surroundings are nothing short of delightful. The most obvious – the Gorges de l’Ardèche – feature limestone cliffs that reach up to 300 m high; one of the most popular sights along the way is the natural 60 m stone arch known as the Pont d’Arc, which hogs much of the local publicity material. It happens to be a particularly pleasant hour’s stroll from the site; take your swimmers as it also has a beach.

Amateur speleologists (that’s cavers to you and me) and other interested parties will no doubt be aware of nearby Chauvet – a Paleolithic network of caves containing paintings and engravings thought to be over 36,000 years old. Easily rivalling the more famous sites of Lascaux and Cosquer, the cave's priceless archaeological value means that unfortunately visitors cannot currently visit the caverns. However, the excellent Grotte Caverne du Pont d'Arc Cave Exhibition is the next best thing.

The local region is studded with what are known as villages de caractère – timeless symbols of the area’s rural heritage heavily marketed by the tourist board. Once you see them in the flesh, however, it’s hard to refute their obvious wow factor.

Balazuc and Vogüé in particular are worth heading to. The former hangs off a steep hill and cliff-top and is surrounded by trees; the latter is a similarly stunning collection of stone houses huddled together beneath an imposing 17th-century château.

The site really comes into its own as a chilled retreat from the summer-time masses. With over 100,000 tourists descending on the area throughout July and August alone, it can be difficult not to feel a bit smug as you chill on a hammock or paddle in peace, while the 250+ pitch resorts across the river milk the masses with over- priced activities and tacky discothèques.

We have to say: it’s much better to be doing Le Clapas; let the others do Ricky Martin.

All the amenities you’ll need are here, except a restaurant. There are two modern sanitary blocks with hot water plus washing machines, grocery store and snack bar – and everything is clean and functions well.

For via Ferrata, tree climbing and a tyrolean traverse over the river, try Adventure Camp (0033 4 75 35 94 13) in Grospierre 15 km away.. Kids will love exploring the caves at Aven d’Orgnac (0033 4 75 38 65 10). Treat yourself to a stay in a castle. Head to Balazuc and discover how chic Moroccan tadelakt interiors go hand in hand with medieval fireplaces and Romanesque exteriors at the striking Château de Balazuc (0033 4 75 88 52 67). The village of Labeaume (15 km) is also a stand out spot for a historic roam around, right on the banks of La Beaume river.

Pizza and frîtes are served up on site throughout the summer, but for pukka Provençal food check out Les Tilleuls (0033 475 377 212) in Lagorce. Vallon Pont d’Arc also has a regular market every Thursday and a food market every Sunday in high season.

From Aix-en-Provence, take the A8 to Salon-de-Provence. Take the A7 towards Orange. Continue through Orange on the E15 and turn off towards Vallon Pont D’Arc. Follow the signs to Salavas and then keep a look out for signs to Le Clapas.

The closest you can get is Vallon Pont d’Arc, which is accessible by train or bus, or Salavs by bus. From there, the site is a 25-minute walk or a taxi ride (about €13). 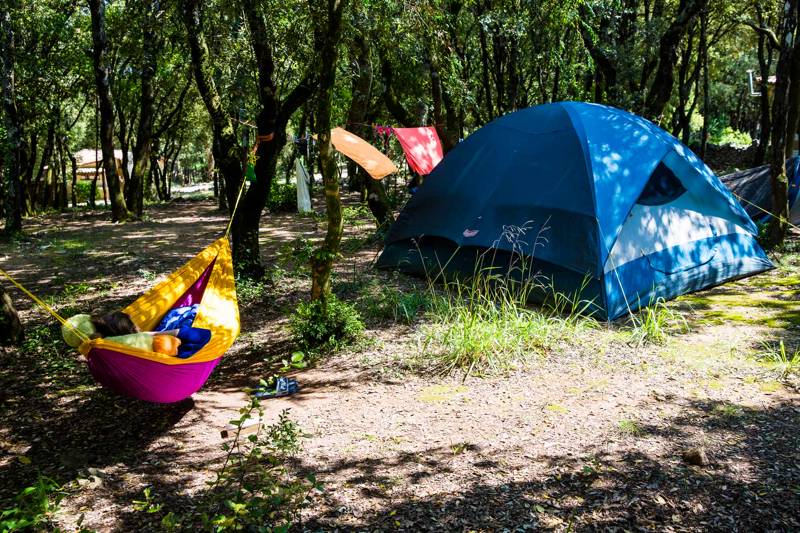 Camping and glamping right next to the Gorges de l’Ardèche, a camping field, luxury yurts, safari tents, a beautiful river, and welcoming hosts 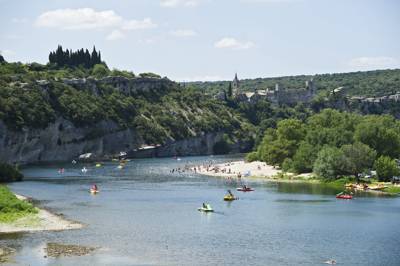 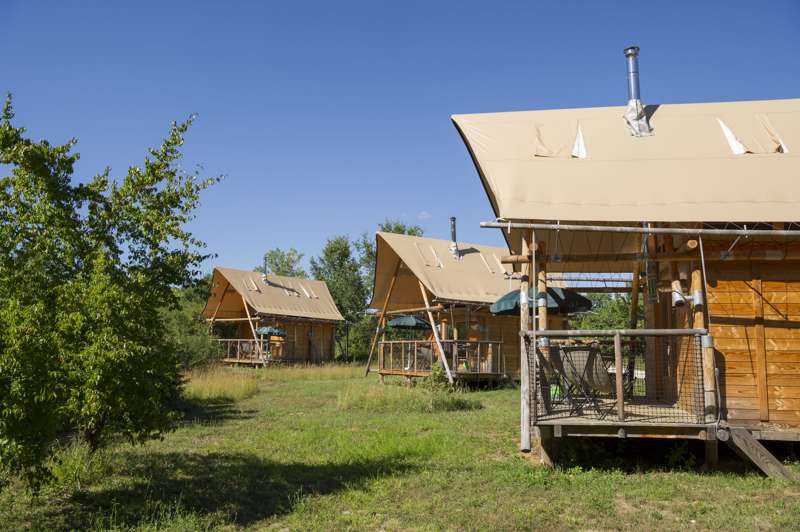