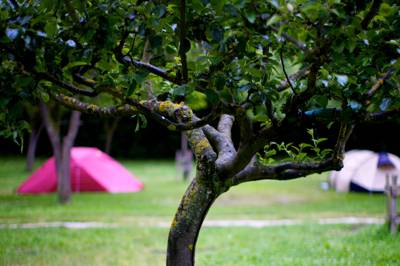 A small campsite, just a finger of land beside a gushing river tucked into a valley

Henry Higgins may have taught Eliza Doolittle to aspirate her ‘aitches’ and not elongate her vowels, but he could have taught her something more meteorologically sound than ‘the rain in Spain falls mainly on the plain’. Because it doesn’t. If she had a problem pronouncing her Ps, he could have told her that ‘the precipitation falls principally on Los Picos’. Which it does.

It would be misleading not to mention the rain here – rather like recommending Scotland and neglecting to mention the midges – because it does have a tendency to fall with alarming frequency. But a good brolly and some stout boots will keep it in its place and in between the rain showers, when the drifting clouds part, you’ll find that there’s a spectacular mountain wilderness to explore.

The imposing mountains of Los Picos are the much-neglected cousins of the European ranges. In the 18th and 19th centuries, when paparazzi painters were capturing the better-known peaks of the Alps and the Pyrenees, these poor relations just quietly got on with it. They’re called the ‘Peaks of Europe’ because, according to returning Spanish sailors, they’re the first landmark you can see from the Atlantic to let you know that you’re nearly home.

Despite their visibility, though, these mountains have traditionally been remote and inaccessible. They represent the high- watermark of the Moorish incursion into Spain. This began in ad711 and caused a tide of Spanish refugees to wash up in high valley towns like Potes.

Known as mozárebes because of their contact with the Arabs in the south, these folk began La Reconquista, the reconquest, following a victory for the Asturian king Pelayo at Covadonga. Columbus had returned from America by the time it was complete, but Asturians are very proud of the fact that their mountain was the first one to be reclaimed, and like so many of the peoples of northern Spain, they remain fiercely independent to this very day.

It’s no wonder, when you consider the road up from the coast to the medieval town of Potes. It’s as dramatic a gorge drive as you’re likely to find anywhere, with huge slabs of rock looming over the road. In some places they literally hang over it. Cheddar Gorge is just a cheesy nibble from the finger buffet compared with this thing – it’s the full fondue. Come to think of it, it’s so difficult to get here you wonder why Potes needed the 15th-century defensive tower that dominates the town in the first place.

The campsite at La Isla is a short distance (around 11⁄4 miles/2 km) up the road from the town. It’s quite small, just a finger of land beside a gushing river tucked into a valley. Trees dot the pitches around the knuckles, but there’s a free camping area at the finger’s tip, where you can spread out on the thick grass. Right down by the river there’s a small bar with a TV, which seems to be permanently tuned to live bullfighting.

To get a real sense of your surroundings you need to gain some height, so head up the hill to the imposing monastery, from which there are finger-clicking views of the mountains. But for the really dramatic stuff you need to carry on up to Fuente Dé, where there’s an even more fantastic view of a great wall of rock rising sheer from a meadow of wild flowers and cowpats.

There’s a cable car that runs up to the nearest peak, from which there are high- altitude walks in the pristine Picos. Sure, it may rain. A bit. But it’s a small price to pay to stay in the peaks of Europe.

106 pitches shared between tents, campervans and caravans. Bungalows also available. There's a swimming pool, coffee shop/bar and childrens' playground. Facilities are to be found in a neat and very clean wood-beamed, red-tiled-roof block by the river. There are plenty of showers and outside washing-up facilities. There’s also a pool, with lots of rules (like wearing a bathing cap).

Not for the faint-hearted is the cable-car ride from Fuente Dé to the peak of Los Picos. Until you see it in action you won’t believe how steeply the cable cars climb the 750-metre ascent. It only takes 31⁄2 minutes, but can seem like a lifetime if you’re scared of heights. Try a night in the Parador at Fuente Dé (0034 942 73 66 51). It overlooks a meadow of daisies and buttercups at the end of which is the wall of mountain the cable car climbs. Standard double rooms start from €118.

This is tourist territory so don’t expect culinary miracles. The atmospheric Café de Picos (0034 942 73 81 43 ) on the main street at Plaza Capitán Palacios 20 is an interesting joint with bronze buddhas above the bar and old wooden skis on the walls. It serves a range of tapas, mostly unidentifiable, but then that’s half the fun. There’s something with anchovies. At least you hope they’re anchovies.

Leave the main coastal road at Km 272, heading for Potes. Follow the road up through the gorge and through the town of Potes, towards Fuente Dé. Almost 2 miles (3 km) out of town, as the road winds up the valley, the campsite is signposted on the right.