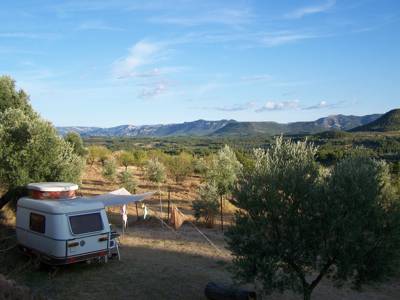 Perfectly and tastefully adapted to get a full-on Spanish experience

Picture this. The sky is a startling blue, save for a lonely cloud sweeping like a white paintbrush stroke across the distant horizon. A bird with a graceful wingspan weaves concentric circles above a small hill crowned in soft, matt-green foliage. The valley is a gently tiered landscape of olive and almond trees lined up like soldiers, flattening out into a yellow, parched landscape, before erupting into a distant wall of red rock. Sounds too good to be true? Wait, there’s more.

In the foreground, long afternoon shadows of a row of olive trees fall across the campsite, letting you know it’s high time you drew up a pew on the little umbrella- studded patio. From the flat-roofed bar, fashioned from rustic timbers and rugged rock, a friendly face emerges with a glass of cold draught beer.

The Dutch couple who pulled this little piece of paradise together have managed to figure out exactly what camping in Spain should be about. Jet Knijn and Joost Leeuwenberg purchased this 19-acre property in 2002.

By recycling tiles and stonework from the original villa the couple built a delightful family home in the style of the region. On the nearby campsite, the washing area, bathroom and tiny bar were also specially constructed to help keep temperatures down and reduce environmental impact. The finca not only looks great, but its design got the thumbs-up from the locals, too.

During building, Jet and Joost lived in a caravan with just a solar shower and a composting toilet for company, an experience that turned them into camping-purist converts. La Fresneda has only 24 pitches and to keep the atmosphere really relaxed the couple discourage you from bringing your doggy companions, groups of friends, any hangers-on or other appendages. Lack of permanent cabañas is part of this message. Despite the seasonal heat, they don’t have a swimming pool, preferring the explorer-style of camping enthusiast rather than those who go for sun ‘n’ splash-style hols. Well, at least everyone knows where they stand. Instead, they built a shady garden atrium to cool down and relax.

And there is plenty of exploring to be done. Ancient paths traverse local medieval villages, wild countryside, rugged canyons and mountainsides. Natural-rock swimming pools are 15-30 minutes away, giving you a refreshing respite from the heat. A 4x4 adventure into Los Puertos de Beceite lets you explore this scenic natural reserve, whilst the Via Verde, an abandoned railway track-turned-bike trail, gives you the choice of exploring by bike or on horseback, if that’s what takes your fancy. Jet has meticulously catalogued all these adventures in a handy little how-to campsite guide, so no excuses for not getting up to your middle in it.

Meanwhile, back at the campsite, Bar La Roca and the adjoining patio are well placed for early risers to get their espresso fix and pastries for breakfast, and in the evening, draught beer and wine from the local wine co-op slips down a treat. Joost cooks paella every Saturday night, while, on other days, you can order (early) tapas or a three-course meal delivered to your pitch. Now that's service.

In the off-season, when the campsite is closed, Jet and Joost harvest their own olives and take them to the local press. The big ones are saved for scoffing, whilst all the rest are bottled up to make edible souvenirs for the next camping season: a thoughtful pressie to take home to Grandma. Either way, you won’t have to leave empty-handed as you’ll be given a goodbye gift of locally harvested almonds. A little piece of paradise. In a nutshell.

24 spacious pitches with electrical hook-ups (6 amps). Immaculate and tasteful bathrooms (including disabled facilities), a good washing area with washing machine and basins. Bar "La Roca" with terrace (meals available 7 nights a week). Fresh bread availlable every day at 9.00 am (except on Sundays). Gas bottles on sale, telephone, postal service, safe, WIFI available on the entire campsite and free of charge. Plus amazing garden atrium to cool down and relax.

Go no further than Bar La Roca where you can order paella, tapas or a 3-course menu 7 nights a week. Vegetarians are catered for. There´s beer on tap, local organic wines and a handy espresso machine.Order fresh bread to be delivered to your tent each morning at 9.00 am (except on Sundays).

Camping La Fresneda is situated in our own 'finca' of 18 hectares in a beautiful valley overlooking almond and olive groves and has a panoramic view to the National Reserve 'Los Puertos de Beceite'. The ancient village of La Fresneda is 3 km away. Because of the beautiful location and its friendly and relaxed atmosphere our campsite is the ideal base from which to explore this beautiful but little known part of Spain.
At Camping La Fresneda you can hear the silence. Our small, rural campsite offers 24 spacious pitches to welcome guests who respect and are looking for an idyllic place to enjoy peacefullness and tranquility. We don´t have fixed pitches, or chalets and no swimming pool.
At checking in you will receive a binder that contains maps, detailed information about various activities (hiking, cycling, etc.) and other tourist information.
Read More

We take your safety extremely seriously. We will do all we can in line with the government COVID-19 guidelines. From limiting the number of people on our campsite, thorough and regular cleaning of the facilities to adding extra hand cleaning points.

Twice a day there is a bus from Alcañiz to La Fresneda. The campsite is 3 km from La Fresneda.