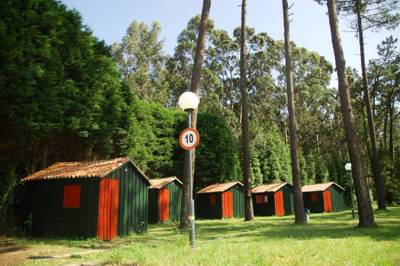 5 beaches within 5km, most of them wonderfully secluded

Rocky peaks, winding inlets, and dozens of deserted beaches – welcome to the eerily beautiful Costa da Morte. Its fearsome name (meaning 'Coast of Death') stems from the constant clobbering the shoreline receives from the Atlantic, and countless shipwrecks that now litter the seabed. Wild, windy and often foggy, this unspoilt part of Galicia is not nearly as ‘touristy’ as the neighbouring regions to the south, yet boasts similarly beautiful coves, wide sweeping bays and tiny fishing villages huddled against dramatic headlands. Being off the beaten track won’t appeal to everyone, but we feel this sense of isolation and lack of large-scale tourism is all part of the appeal.

Located between the villages of Carballo and Malpica, in a lush forest of pine and eucalyptus trees is Camping Sisargas, the ideal starting point to explore Costa da Morte and beyond. This peaceful, family-run site offers 145 spacious plots (60m2), with shade and shelter on a comfortable lawn, dotted with small yellow flowers. You will never see tents side by side here. “We like the fact that people have their space” says Gema, one of the site's approachable employees. In fact being off the tourist trail means Sisargas rarely gets full, so campers have the luxury of choosing their very own pitch. Besides the campsite, there are six modern bungalows, five cosy Canadian huts and a plethora of first rate facilities, including a café, restaurant, free Wi-Fi, swimming pool, BBQ’s, tennis court and a playroom for rainy afternoons.

Whilst we’re on the subject of rain, if you spend a decent amount of time here you’ll probably get wet. That’s because the rain that’s supposed to fall mainly on the Spanish plain, actually drops on hilly Galicia. The weather is certainly unpredictable in these mystic parts, so when the sun is playing ball, days can be bright and sunny with a light you won't find anywhere else, and the nights chilly. But where exactly is Galicia? Well, think Portugal and up a wee bit. Or Ireland and down a lot, which isn't as daft as it sounds. On the far west of Spain's northern coast, Galicia is very much part of Europe's Celtic past. Mystical religion, rituals and that rugged coastline reveal its connections with Ireland, Wales and Scotland.

Back at Camping Sisargas the local area is surrounded by woodland paths (some paved, some not), which are great for walking, cycling or just getting lost. This is a very quiet site, so the owners politely request peace and quite from midnight till nine, ensuring the only sounds to be heard are birds chirping above, the wind whistling through the tall trees, and if you’re lucky, the squeak of a black squirrel. The atmosphere here is unbeatable: secluded, inviting and wonderfully natural. And after all, isn’t that what camping is all about?

5 Canadian huts, 6 mobile homes, 145 pitches and an area that is not divided in pitches, specific for larger groups (up to 15 tents or so). 1 sanitary block (separate entrances for men and women) with: 18 showers, individual heaters, free hot water, 20 toilets and 20 sinks. On the outside of the sanitary block there are another 10 sinks for washing dishes, 10 more for washing clothes and 2 specific areas for hanging clothes to dry. Sisargas also has toilet facilities for the disabled and babies, and there is also the possibility of using the sites washing machines and dryers at an extra cost. Free Wi-Fi (in the common areas), barbecues for common use, swimming pool, tennis court, basketball, table tennis, futbolin, library with books and magazines in several languages, games room and playground for younger children.

Anyone who wants to be in contact with nature and have a relaxed holiday! Tents, caravans, campervans, kids, groups and pets – yes.

Galicia offers campers an alternative Spanish experience. With its Celtic connections, natural beaches and some of the best seafood in Europe, it seems strange this region remains largely unexplored by tourists. Well worth a visit are Refugio de Verdes (old mills along a river), the Celtic settlements and the Dolmens (ancient tombs). If you fancy a taste of urban Spain, less than an hour away (by car) is La Coruña and Santiago, two of the nicest cities in Galicia. The port city of La Coruña is a busy commercial centre, historic city and a modern metropolis all rolled into one, whilst a day spent walking the medieval streets of Santiago will delight. The Costa da Morte has many secluded beaches and craggy cliffs waiting to be discovered. This area starts close by and ends in Finisterra, 80 kilometers away by road. 20 minutes away (by car) is Razo beach, one of the best surfing spots in Spain, where many competitions take place. There are surf schools and board rentals shops available for all abilities.

The site has a restaurant and coffee shop, serving breakfast, lunch and dinner. They also have a good selection of beers and local wines. Fresh, homemade pizzas can be ordered, the dough is made onsite. Other dishes are available, like a cheese platter (with local cheese), or home-cooked vegetables. There is also a small shop selling freshly-baked bread and croissants, basic food supplies and liqueurs. Offsite, there are many places to eat good seafood in the town of Malpica (2.5 km away) – the price-to-quality ratio is very good. There is a good grill restaurant in walking distance from the campsite (250 m away), and a high-end eatery, awarded with one Michelin-star, in Barizo, 5 km away.

The campsite is 47 km away from Coruña and 59 km away from Santiago de Compostela. In both cases, take the highway A9 towards Carballo. Once in Carballo, go towards Malpica de Bergantiños. Camping Sisargas is on this road, about 2 km before reaching Malpica.

There is a bus stop 100 meters away with several buses running all day to Carballo, where you can change to many other destinations. There is a direct bus from here to Coruña 3 times a day, click here for timetables.