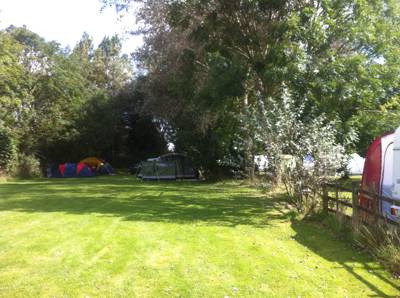 A charmingly simple campsite with grassy pitches, ample space and a secluded feel

Tucked inland from the Lincolnshire coast, West End Farm is the sort of place you discover on the off chance – a last-minute break to an area you’ve never visited or a friendly recommendation overhead along the beach. Yet once you’ve stayed at this secluded site you’ll never want to leave. You see they don’t go in for anything big here; you’re not going to see it on a poster or hear about it on the news and the bigwig caravan parks on the sea front have stolen Google’s top 'Lincolnshire' searches, but it’s all a blessing in disguise. A little secrecy never hurt anyone and this enigma of a campsite deserves to be kept hush hush. So while we’re going to spill the beans be prepared to keep your voices down, we wouldn’t want the entire world to know now would we?

Poised in the flat, arable countryside where the Lincolnshire Wolds peter out into the patchwork of the eastern coast, West End Farm is a four-acre campsite with a spread of grassy pitches. The large meadow is scattered with trees, dividing the place up nicely, but it still has a delightfully open feel, especially when the sun is beaming down. Tents are pitched around the edges, so campers aren’t rowed up with neighbours, and kids have plenty of space. As for the facilities, well, they're nothing out of the ordinary but everything is spotlessly kept and by the time you're swooning around the tiny information hut you'll find there's nothing else you could need. There’s something suspiciously simple about it all, as though nothing so understated could be quite so utterly brilliant; a few swings, picnic benches and a warm and welcoming owner are all it seems to take. The site has you sold in an instant.

Beyond the tent flaps, West End Farm is a peaceful place to be. There’s a decent network of footpath and bridleways in the local area – the nearest pub is a mile and a half away – and it’s less than five miles to the Lincolnshire Wolds, perfect for longer walks and a full day out exploring the countryside. The old Market town of Louth is one of the best places to start from. Try a jaunt on dog-friendly Hubbard’s Hill and watch your younger campers dabble around in the ankle-deep streams that amble quietly down the slope. It's a perfect spot for family picnics. From here you can slip back into the town centre for a bite to eat in a café or slope on back to the farm with a pack of Lincolnshire sausages in the bag and a barbie ready to rumble.

Ladies have 2 showers, 2 basins, 2 toilets and a hairdryer; gents have 2 showers, 2 basins, 2 toilets and a urinal. There's a washing up area and clothes sink, a washing machine, chemical waste disposal and a fridge-freezer for ice-packs that anyone can use. BBQs are permitted but campfires of any kind are not allowed. There are swings and a play area for little campers. Use of the internet is free.

Directly between Grimsby and Skegness, it's around 40 minutes in either direction to the two famous seaside resorts, yet when you want a little peace and quiet the lesser known areas in between have plenty to fill your boots. To the west, the old market town of Louth is worth a visit (with market days on Wednesdays, Thursdays and Fridays) and marks the edge of the Lincolnshire Wolds AONB (01507 609740), with good walking and cycling routes to offer. For many, though, it's a 15-minute drive east that's the main attraction, where there's a range of good beaches and the excellent Saltfleetby–Theddlethorpe Dunes National Nature Reserve.

From Louth, Follow the A157, passing through, Legbourne, North Reston and South Reston. Pass the Waggon and Horses pub on your left. In about 1/4 of a mile after leaving south Reston turn left signposted Great Carlton, Manby and West End Farm. Do not turn off before passing through South Reston! From Mablethorpe, follow the AI104 to Maltby Le Marsh, in Maltby turn right onto the AI57 towards Louth, follow the road through Withern over the river and up the hill. At the top of the hill take the second right signposted Great Carlton, Manby and West End Farm. From this point, in either direction follow the road for about 1/2 a mile. West End Farm is on your right. Please turn into the lane and turn right again into the site at the entrance.

Do not enter Chapel Lane, Great Carlton – it's a narrow dead end!

Grimsby Market Rasen or Skegness are the nearest train stations. Then bus to the campsite with Stagecoach #9, getting off at Gayton top (1 mile walk) or Call Connect from Louth who will bring you to the site once you organise collection. 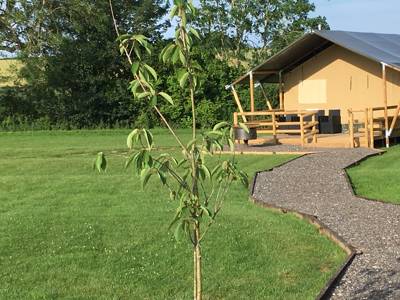