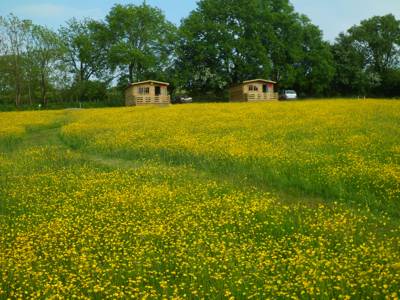 Camping and wooden cabins just north of the Lake District, with views of Caldbeck High Pike and Skiddaw in the distance
The Lake District needs no introduction. Its fabled fells and tranquil tarns have been stirring the souls of visitors to this spectacular part of the north-west since before Wordsworth put quill to parchment. Today, tourists of all ilk flock to the region year-round. Consequently, for all it's sprawling 885 square miles, the Lakes can at times can feel a little on the busy side. Thankfully, we know a little place just on the northern fringes of the Lake District National Park proper, meaning you'll avoid the hubub of waterproof-clad ramblers while still being able to soak up the atmosphere.


Plotted just outside the charming Cumbrian village of Caldbeck, Wallace Lane Farm is the Stanyer family's gorgeous 23 acre small holding. Besides your affable hosts (John and Janet), the farm is home to rare-breed sheep, free-range chickens and several ponies. From its enviably, elevated vantage point high in the north Cumbrian fells, the views are stunning, taking in Caldbeck High Pike and stretching to the Solway Firth and beyond to the Scottish Uplands.

The site is open to both tents and caravans, with five hardstandings for the former and six pitches for the latter (all bar one of which is fully-serviced). The real stars of the show here though are the three wooden camping cabins. Built by John's own fair hand, we're inclined to agree with Wallace Lane's audacious claim to "the most luxurious camping cabins in Cumbria". These roomy (4m x 5.25m) timber lodges are decked out with all the usual mod-cons, including a proper dining table and nifty little kitchenette. But these little touches of civility don't mean you're in for a watered-down version of 'the great outdoors' experience. With the breathtaking mountain views, and the warming crackle from the cast-iron wood-burning stove, these wooden cabins are redolent of a grizzly lumberjack's digs (albeit one with a penchant for crisp, white Egyptian-cotton sheets and flowery pillows). Whether visiting in the summer amidst the buttercup-dappled fields, or in the fresher, autumnal months, peace and quiet is guaranteed.

With the Lakes on your doorstep, not to mention Hadrian's Wall, Kielder Forest, and even the Yorkshire Dales all within easy reach, you'll not be stuck for places to visit. Oftentimes though, it's the lesser-known discoveries that really make a trip, so be sure to utilise John and Janet's expert local knowledge. Case in point; the St Kentigren churchyard in Caldbeck village hosts the grave of a certain John Peel (not that one), famous 18th century Cumbrian huntsman and all round raconteur immortalised in local ballad. No doubt you'll be leaving singing the praises of Caldbeck's other celebrated John after your fuss-free stay at Wallace Lane Farm.

5 caravan pitches (hard-standing) and 7 camping places all with electric (16amp) and water; 3 brand-new cabins, sleeping up to 4 people each. All cabins come with 2 sofa beds, dining area with table and chairs, fully-equipped kitchen area (including 4 burner camping cooker, fridge, microwave kettle and toaster), wood-burning stove (logs and kindling provided), TV/DVD player, lighting/power-points, decking with seating and table. Cabins have free use of a fully-heated shower block (with toilet) in the same field.

Wallace Lane Farm is ideally located to explore the best the Lake District has to offer. The Caldbeck and Uldale Fells are brimming with wonderful walks and breathtaking views – John will be only too happy to talk you through the best routes. Skiddaw, England's fourth highest mountain, lies just to the north of nearby Keswick for any campers wishing to scale her surprisingly accessible slopes. The region is, of course, synonymous with the Romantic Poets and you can visit the birthplace and childhood home of William Wordsworth (01900 820884) in nearby Cockermouth. Further north lies Hadrian's Wall. Those with the time and inclination can traverse its 84 mile stretch, while flying visitors should visit the remarkably preserved Chesters Roman Fort and Museum, around an hour from the site.

For cabin-dwellers, breakfast can be ordered the night before. Do your bit for the local community by popping in for a pint at The Old Crown (01697 478288) in Hesket Newmarket – Britain first co-operative-run pub. Owned and run by over 100 local people and numerous supporters, the Crown's ales and beers are all brewed in the adjoining micro-brewery. Prince Charles has also been known to pop in on occasion. Food-wise, The Snooty Fox (016973 71479) in Uldale takes some topping. Their mammoth portions are the stuff of local legend, with the trio of pork a particular favourite.

From the village of Caldbeck, proceed north out of the village for about 1/2 mile. At the crossroads, go straight on over the cattle grid, following the sign for Wigton. Follow this road for just over 2 miles. Wallace Lane Farm is on the left hand side, marked by a green sign. Enter by the driveway and bear left for the caravan and camping field when the driveway splits. There is plenty of off-road parking and turning space.

Perfectly peaceful Cumbrian working farm, surrounded by some of the best walks the Lakes have to offer... 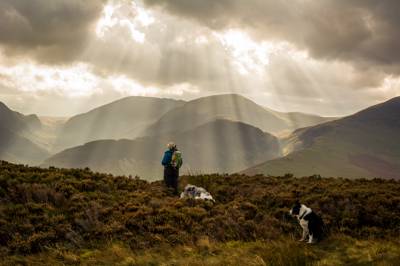