Pigs. Perceived wisdom hasn't been kind to our porky pals. Lazy? Idle? Gluttonous? How about leisurely; meditative; even gourmand? Like its swinish namesake, the philosophy of this lovely Lancashire campsite is one of unbridled relaxation. So do as the pigs do and get yourself to Anderton Fold Farm's unashamedly easy-going new site, The Piggeries.

Set in the sleepy village of Barton within the grounds of a 120 acre sheep farm (contrary to its name), The Piggeries is run by none-more-affable hostess Caroline. This is very much a back-to-basics farm site, oozing traditional English charm. There's boundless fields to explore, grassy hills to roll down, a brook to splash in, and eggs to collect courtesy of the resident chickens.

With half the site given over for tent campers on well-kempt but informally-arranged grass pitches, the other section is set aside for caravans (though this shouldn't put the canvas contingent off, as the two areas are suitably segregated). In addition, there's the Mega Pod. While this may sound like a Bond villain’s secret lair, it is in fact a luxury wooden cabin, kitted out with a double bed, plasma TV, and L-shaped sofa. Sharks and laser beams not included.

Beyond the farm, there's a wealth of places to explore. Just across the road from the long entrance drive, the Lancaster Canal walk is a great way to explore this often overlooked part of the north-west. To the north, the Forest of Bowland – an Area of Outstanding Natural Beauty. Heading east, the affluent Ribble Valley has many charming villages and a few Michelin-starred restaurants. This vast green expanse, scarred by meandering rivers, also served as the inspiration for Tolkein's Middle Earth. While to the west lie the bright lights and seaside kitsch of Blackpool – "the Vegas of the North".

So, as you can see there really is something for everyone at The Piggeries. Staying here, you'll be happy as a pig in... well... you get the idea.

10 non-electric pitches, 6 hook-ups. 1 Mega Pod (sleeps 4). There is 1 shower and 1 unisex toilet as well as a temporary building with 2 gents and 1 ladies loo. Sinks and freezer are available for campers. 'Super pitches' include hook-up, water supply, TV aerial, light and sink waste. There is a children's play area with sandpit, play tower and slide. Campfires allowed in the covered fire pit gazebo.

For literary pilgrims, The Tolkein Trail is essential; taking in the author's sometime dwellings at Stonyhurst College as well as the dramatic landscape that inspired him. Carrying on the fantastical theme, the Pendle Witch Experience (01282 458759) gives guided tours of a Lancashire steeped in supernatural intrigue. The award-winning Clitheroe Castle Museum (01200 424568) is well worth a visit – be sure to ask about the legend of the castle wall's hole. For any cool cats and daddy-os visiting in May, the annual Ribble Valley Jazz & Blues Festival also takes place in Clitheroe. Preston Football Museum. Blackpool has plenty of amusements and places to eat & drink.

The White Bull (01995 640324) in Bilsborrow is a great stop-off point for a canalside pint. The Sparling in Barton (01772 860830) boasts an adventurous menu amongst other pub grub staples – the gardens here are particularly nice too. The Walled Garden Bistro at Barton Grange Hotel (01772 866135) is an elegant setting with a locally-sourced menu to match. The ever-reliable Italian Orchard (01772 861240) in nearby Broughton has been running for over 25 years. Punters flock here for the seafood and al fresco terrace dining. The Clitheroe Food Festival takes place every August too.

April – October. Caravans and Pod are open all year round.

From the north: Leave the M6 at junction 33, take the first exit off the roundabout and continue on the A6 heading south. When you come in to the village of Bilsborrow look out for the Roebuck pub, continue until you see the turn off for the The Piggeries on the left hand side.

From the south: Keep left off the M6 onto the M55 follow signs for A6/Preston/Garstang/Blackpool; Take A6 exit towards Garstang. At the roundabout take the third exit onto Garstang Road A6. Continue along this road until the village of Barton. Go through the village heading towards the village of Bilsborrow look for the turning for The Piggeries on the right hand side.

Nearest railway station is Preston. From there, take a bus or taxi.

Book campsites near The Piggeries 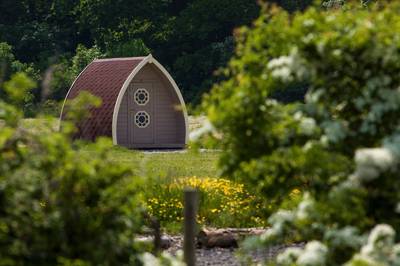