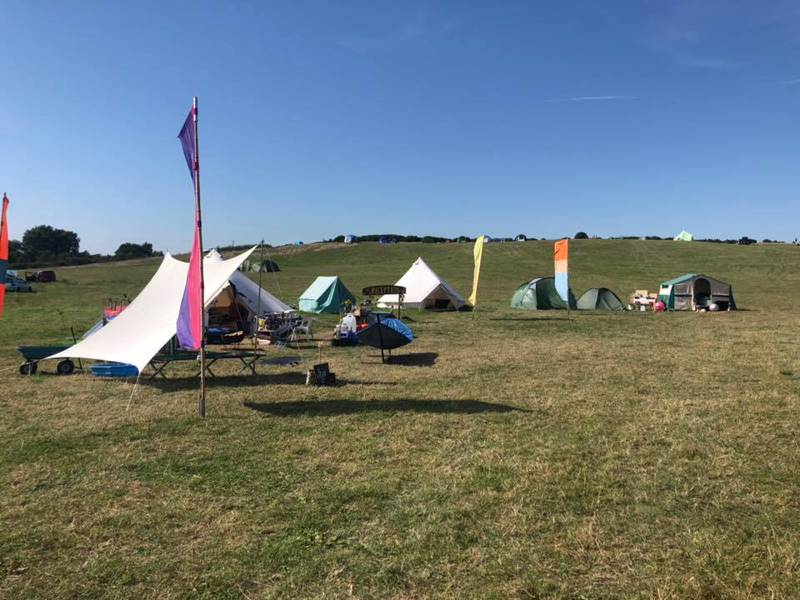 We have an open pitching grass site.

As we have an open pitching site, you can choose what type of pitch you want,  some pitches offer beautiful views of corfe  castle and the sea while others are more secluded and offer a little shade from the trees. We have two water points so you are never too far from water. The toilest and are situated near the reception only a couple of minuites walk from the furthset pitch.  Read More

The magnificent view from the campsite to ruined Corfe Castle, two miles away, will no doubt make you want to visit. It’s a five-minute drive or 45-minute walk to the village and 11th-century castle of the same name (one of the first castles to be built in South West England by William the Conqueror). The castle and much of the village is now owned by the National Trust, which means there are well-organised family activities in summer, as well as good cream teas in the tearooms. Corfe Castle is one of a handful of stops on the Swanage Railway (01929 425800), the closest being the end-of-the-line stop in Norden just a mile from the campsite, so you can ride the old steam train from the castle to Swanage Bay or back towards camp. (A variety of one-way, three and five day, and all-day, hop-on/off tickets are available, as well as standard day-returns.) The beautiful market town of Wareham, set alongside the River Frome, is a 10-minute drive away or a long walk via Stoborough Heath National Nature Reserve. Another nature reserve – Hartland Moor – is on the other side of the campsite and the Furzebrook Estate, home to the Blue Pool and a series of marked walking trails, is just beyond, also within walking distance. But no visit to the Jurassic Coast would be complete without taking in the area’s famous beaches (and perhaps spending some time fossil hunting while you’re down on the shore). Lulworth Cove, Sandbanks, Swanage Beach, Man O’War Beach and Kimmeridge Bay are all less than half an hour away, as well as some of the coastline’s most striking features, such as the rock arch of Durdle Door or Old Harry’s Rocks, the sea stacks off of Studland Bay.

It's a half-mile walk (15 minutes or so) to The Halfway Inn (01929 480402), a snug, partly thatched, 16th-century, beamed pub where dogs and children are both more than welcome. Local Badger beers are on tap and the freshly cooked food includes children's, vegetarian and vegan choices. When the sun's out, there's a lovely picnic area on the paved terrace and lawn. There are plenty of good choices in nearby Wareham too, including the riverside Quay Inn (01929 552735) and The Old Granary (01929 552010), while, closer still, the Kings Arms in Stoborough (01929 552705) has wonderful views over marshes to the River Frome.

If you are travelling toward Corfe Castle on the A351, take the left-hand turning, opposite the Halfway Inn pub (Soldiers Road) then look out for the signs to Knoll Campsite. Follow them all the way and you're there. There is more than one campsite on the road, though – Knoll Farm is on the left-hand side, further down after Camp Hartland.

The nearest train station is in Wareham. From there you can take the 40 Breezer bus to the Halfway Inn, then it's a half-mile (15-minute) walk.