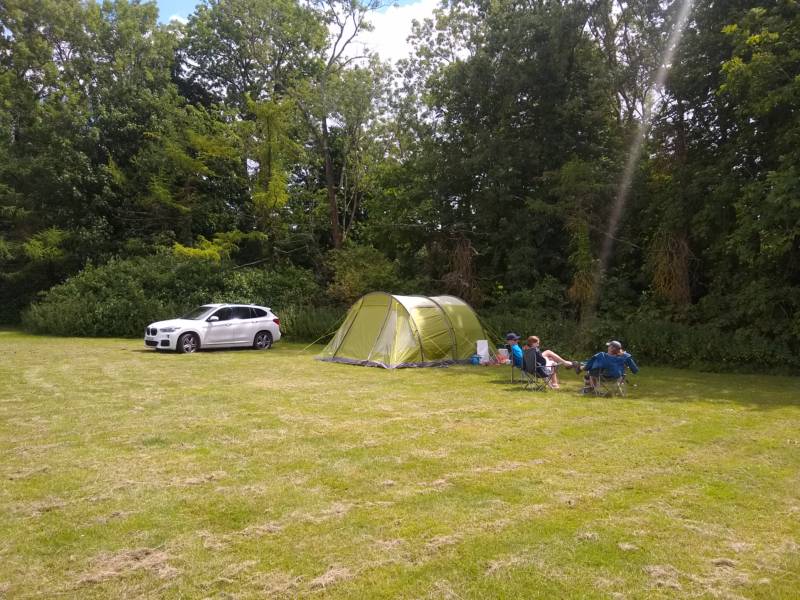 A pop-up campsite on a rugby pitch in Bethesda, between Snowdonia National Park and the island of Anglesey.

It’s pitch invasion time at Bethesda Rugby Club this summer. But what’s this? The invaders are armed with tents and club officials are cheering them on! This is a scene that’s playing out at rugby clubs and school playing fields around the UK this summer, as they are taken over by Popcorn Camping. This growing start-up uses existing well-maintained fields and clubhouse facilities for pop-up campsites at a time when they would otherwise be empty. It’s a neat idea that will turn Bethesda’s scenically-situated rugby pitches into 75 camping pitches for six weeks of summer.

As you might expect for a pop-up campsite on a rugby pitch it’s a back-to-basics affair, but the big benefit of Popcorn Camping Bethesda is its enviable location on the northern edge of Snowdonia National Park. It’s also just five miles from the North Welsh coast and the island of Anglesey, and less than two from daredevil adventure park Zip World, where you can whizz on a zip wire across a former slate quarry. For history lovers, some of Wales’ most impressive castles are within 20 miles of the site: Caernarfon, Conwy, and Beaumaris among them. Mountains, castles, slate mining, beaches, and rugby — it doesn’t get much more Welsh than this.

With so much to do in the area, this site is more of a base than a place to hang out but, nonetheless, it has a very lovely setting. The club is, handily, a short walk from the centre of town, but its vista is all green (apart from the clubhouse and goalposts) with trees surrounding most of the site, the River Ogwen running by, and mountains visible in the background. Pitches are a spacious 10-by-10 metres and facilities are warm and dry in the clubhouse. There are flushing loos, hot showers, and washing-up sinks too. Campfires are allowed but, in order to protect the hallowed turf of Bethesda rugby pitch, you’ll need to head off-pitch to one of the communal campfire areas. All the better for sharing tales of walks up Snowdonia’s peaks or along the newly opened Ogwen Trail that leads from Bethesda to Porth Penrhyn on the coast.

Our campsite is within grounds of Bethesda Rugby Club, and the facilities are in the clubhouse, which has recently been refurbished. We have hot showers and proper toilets available. There are also washing up facilities for washing dishes etc. BBQs are allowed but must be off the ground. Communal campfire spaces are provided but fires are not allowed on the pitches directly.

Tents only. Dogs are permitted, but must be kept on a lead.

You can actually walk from the campsite to the coast, which is a great 5 mile walk, or you can jump in the car and go to nearby Snowdonia for mountains, or Anglesey Island for gorgeous beaches. There is also Zip World close at hand for adrenaline junkies to try out something different.

There are various pubs, restaurants and shops in Bethesda, which is an easy walk from the campsite

Bethesda lies on the doorstep of the beautiful island of Anglesey, and also of Snowdonia, with some of North Wales’s wildest mountain scenery. A new cycle and walking path now links Bethesda with Porth Penrhyn on the coast (5 miles away), with the famous sandy beach of Red Wharf Bay just 15 miles from the campsite. Read More

75 off-grid, grassy pitches
i
Large grass pitch (10m by 10m) in a very spacious field. Parking included on car park, and you may have 1 pup tent plus 1 awning or gazebo per pitch.

Put Bethesda Rugby Football Club in your map search, and you will easily find your way there The nearest train station is in Bangor