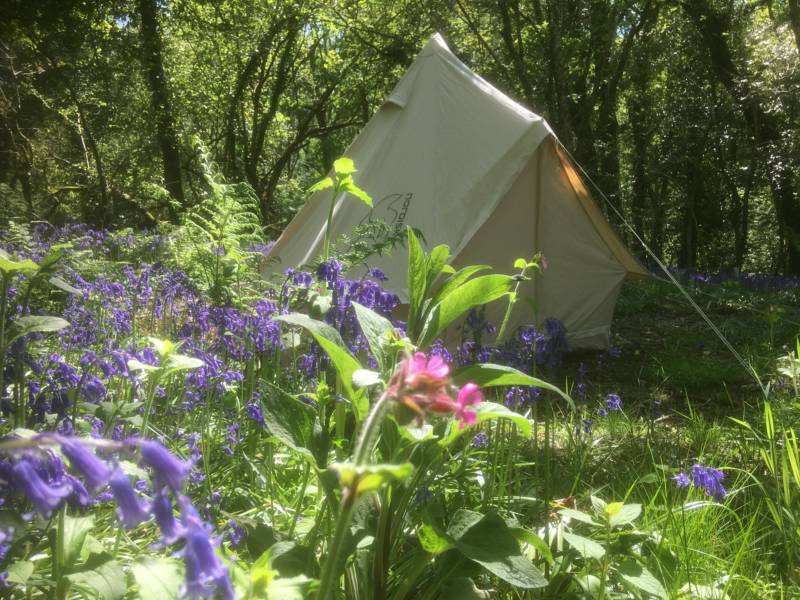 Fifteen pitches are available, each with a fire-bowl for that real camp fire experience, and a picnic table and bench. Some are far apart in the old hay meadow whilst others are on the fringes of the woodland and four on hardstanding suitable for campervans.

In quirky vintage animal trailers there are three spacious and comfortable compost toilets with hand basins, one of which is designed especially for young children. In the adjoining covered outdoor space there is an area with two wash basins and another for food prep with two stainless steel washing-up sinks. Seperately, there are two spacious gas heated showers.  Eco-friendly hand wash, shower gel and washing up liquid products are provided.

At the reception shed is a flush toilet, two fridges, a freezer and USB charge points. Here it is possible to buy firewood, fresh eggs and award winning fudge hand made on the farm.

There are two shelters for activities and evening get-togethers. One is a silk parachute canopy hung from branches in the shelter of an ancient quarry now a small attractive bluebell hollow where a fire-pit forms the centre of attention on dark evenings; the other is a lakeside zinc and wood-pole open barn, beside a brook which tumbles into a series of small pools before it joins the wildlife lake. It is perfectly situated to catch the last of the evening sun.

Whilst Pete is dubbed the Grumpy Farmer the real Grumpy Farmer is in fact what we call the lakeside pole barn where centred around a wood-fired oven or wood fuelled BBQ fun and food can break out spontaneously  with less than 48 hours notice, on an appropriate evening.

Whilst secluded, Cilrath Wood Camping is only a few minutes drive from the little market town of Narberth, famed for being “UK’s Cleanest and Greenest Town, shortlisted as one of the “Best High Streets in the UK”, named amongst the “Best places to live in Britain” and being ranked as one of the “Happiest places in Wales”! The campsite is centrally situated giving easy access to the spectacular coastline on all three sides of the Pembrokeshire peninsula, which forms Britain’s only coastal National Park and is the most westerly part of Wales. It has a coastal footpath that twists and turns its’ way for 186 miles, covering almost every kind of maritime landscape, from rugged cliff tops and sheltered coves to wide-open beaches and winding estuaries.

Romantic couples, special friends and lone campers will appreciate the privacy and peace. Young parents will enjoy introducing their children to an old fashioned idyllic rural scene and the more energetic agile oldies will reminisce on similar tranquil times past.

Cilrath Wood camping is an ideal place to come on holiday for anyone who likes gentle outdoor activities or wants to relax in beautiful surroundings. Its' special and unique charms will be enjoyed by anyone who appreciates traditional wildflower meadows, old hedges, natural woodlands, brooks and ponds teaming with wildlife, and a dark sky to watch the stars come out on a clear night.

The site is suited to tents and campervans but not large motorhomes and touring caravans.  We do not allow dogs on site.

Cilrath Wood Camping is only a few minutes drive from the little market town of Narberth with its small independent shops and numerous eateries. It is famed for being “UK’s Cleanest and Greenest Town, shortlisted as one of the “Best High Streets in the UK”, named amongst the “Best places to live in Britain” and being ranked as one of the “Happiest places in Wales”!

Nearby Narberth just of the A40 is centrally placed on the map affording excellent access to the entire spectacular coastline on all three sides of the Pembrokeshire peninsula, which forms Britain’s only coastal National Park and it is the most westerly point in Wales. The coastline has a coastal path that twists and turns its’ way for 186 miles covering almost every kind of maritime landscape, from rugged cliff tops and sheltered coves to wide-open beaches and winding estuaries. It is also just a ferry hop from Ireland and a three hour car drive from England.

The air is so clean, evident by the lichens, mosses and ferns that cling to anything that stands still long enough. Peaceful and tranquil but never silent as there is always the sound of birds, humming insects and distant agriculture in progress with sheep bleating, cows mooing and the occasional tractor mowing hay.

The landscape is so diverse but everywhere are wild flowers and some are quite rare. Numerous woodlands and copses are connected by miles of traditional hedges and earth banks forming an unending patchwork. The ancient history of Pembrokeshire is etched everywhere into the landscape if you know what to look for. Wherever you go you can see the Preseli Hills lifting the horizon with their own unique weather system hovering above, which no weather forecaster has seemed to master.

In any direction every 10 to 20 miles there is a diverse choice of interesting historic market towns. Ancient castles crop up along the Landsker borderlands where there is the remarkable blend of cultural Welsh speaking Wales meeting English speaking “Little England beyond Wales”

Cilrath Wood Camping is also ideally located for easy access into neighbouring  Carmarthenshire and also up towards Cardiganshire (or Ceredigion as it is now known).

Food matters, but a meal matters more, and greater than a meal is a shared meal.

It's a four-minute drive or half-hour walk into Narberth town. Try the excellent Spanish deli and café Ultracomida and stock up on cheese, olives, wine and other bits or enjoy lunch at their compact arrangement of communal tables. Close by on the opposite side of the High Street is Fforc Welsh Produce, an all welsh food delicatessen & micro sourdough bakery. Another great daytime spot is Plum Vanilla (01834 862762) café, a local favourite offering multiple vegetarian, vegan and gluten free options, which are able to excite even the most avid carnivore. You may need to get there early as it's often full of locals. For restaurants, try the high-end seafood at Mad Tom’s (01834 860506) or trendy bistro The Peppercorn (01834 861778).

Further afield, Tafarn Sinc (01437 532214) is an amazing Welsh pub in the Preseli Hills, recently bought out by the locals with shares in a community cooperative. Formerly the last stop railway hotel adjoining an old slate quarry, it is clad in corrugated roofing and the floor inside is covered with sawdust. An atmospheric must-visit if you're in the area.

Quayside is a multi award winning cafe, down by Lawrenny Yacht Station on the Estuary of the Cleddau the major river basin in Pembrokeshire, a delightful place to sit out on a calm day watching the boats. Further still, spectacularly positioned on the north Pembs coast is the Sloop Inn at Porthgain. Seriously hearty pub food with seafood options.

To the south, the Milton Brewery pub and the chip shop opposite are worth a visit as is the gastro pub in Cosheston Village nearby. The cafe at Stackpole Quay is forever popular and the tea rooms “Ye Olde Worlde Cafe”  in Bosherston Village is worth the stop.

Cilrath Wood Camping has fifteen pitches hidden away on a Grade Two Listed traditional Pembrokeshire farmstead. The campsite is focused around a rare haven of old pastures with uninterrupted views of the countryside and Preseli Hills, semi-ancient woodland rich in fauna and flora and a beautiful wildlife lake fed by two babbling brooks; all of which are far from any dwelling or roadway.

For the last 30 years Pete, a.k.a.  “ the grumpy farmer” and his lovely wife Jackie, have had the privilege of being the ‘steward and guardian’ of this rare and environmentally sensitive landscape and now it is their joy to share this space with discerning campers. Wherever possible the ethos of being off-grid, sustainable and green, is applied to the campsite without compromise to comfort and quality of facilities.

Whilst remaining a secret tranquil haven Cilrath Wood Camping is only two miles from the renowned town of Narberth with its small independent shops and numerous eateries. It is also centrally placed on the map offering excellent access to every part of the Pembrokeshire peninsula and all that it has to offer visitors.

Please note, during school summer holidays, meadow tent pitches are only available for weekly bookings (Saturday to Saturday). Woodland and Campervan pitches are available on any check-in day with a minimum two-night stay.
Read More

Fifteen pitches in total. Most in the meadow, four on hardstanding and five are in the secluded fringes of the woodland. Please note, during school summer holidays, meadow tent pitches are only available for weekly bookings (Saturday to Saturday). Woodland and Campervan pitches are available on any check-in day with a minimum two-night stay. 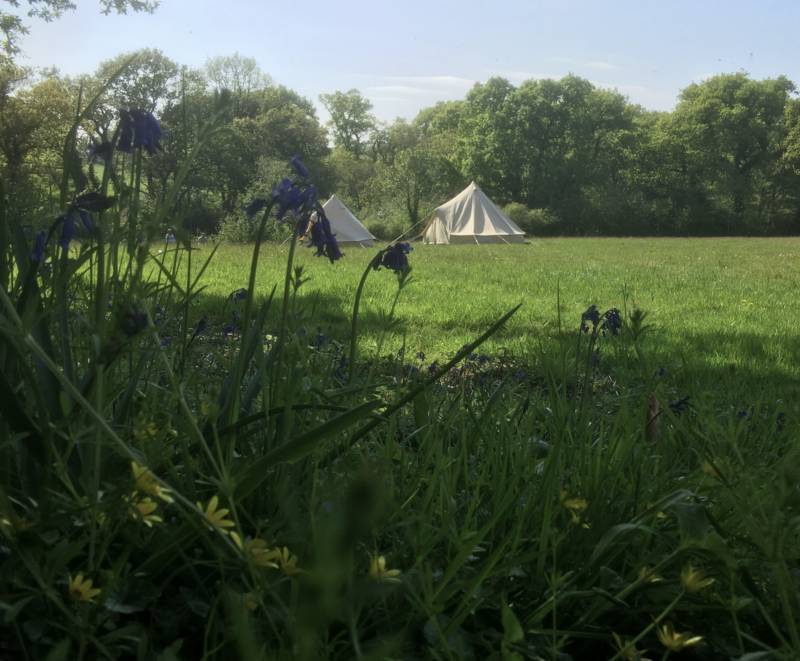 i
Grass pitch within an ancient meadow adjacent to a beautiful wildlife lake, mature woodland and diverse hedgerows with uninterrupted views of the countryside and Preseli Hills. The site is far from any dwelling or roadway.

Grass pitch Sleeps 6 3 Available
Grass pitch within an ancient meadow adjacent to a beautiful wildlife lake, mature woodland and diverse hedgerows with uninterrupted views of the countryside and Preseli Hills. The site is far from any dwelling or roadway.
Select Dates or Read More 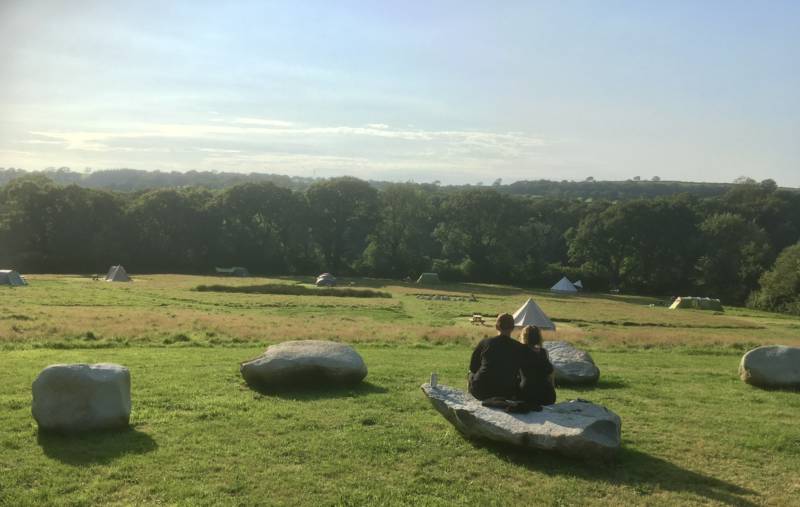 i
A hardstanding for a campervan with adjacent grass area for an awning, set within an ancient meadow bounded by a beautiful wildlife lake, mature woodland and diverse hedgerows.

If you are using a SatNav, use the campsite name “Cilrath Wood Camping ” and NOT the post code to find us.  If the post code is used it will take you in the wrong direction along a neighbouring lane to a farm with a very similar name.

Narberth and Clunderwen railway stations are both approximately one and half miles away from Cilrath Wood Camping. 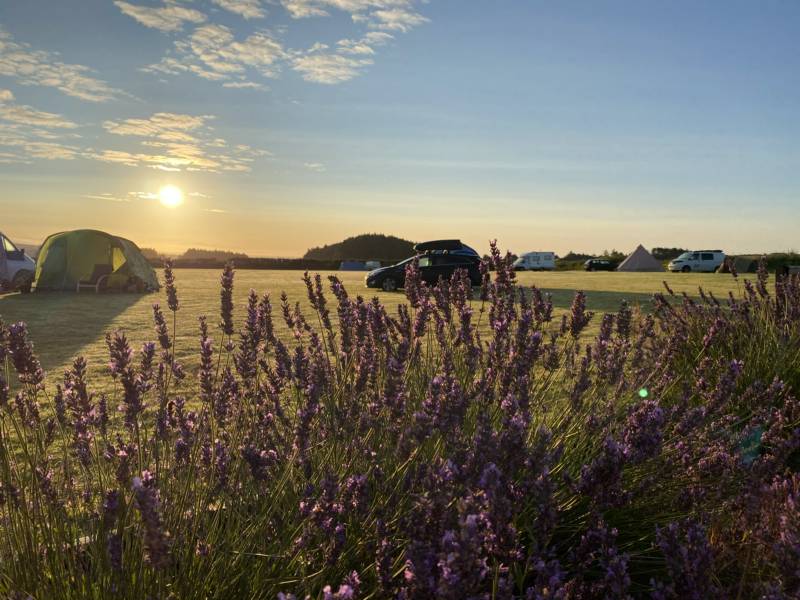 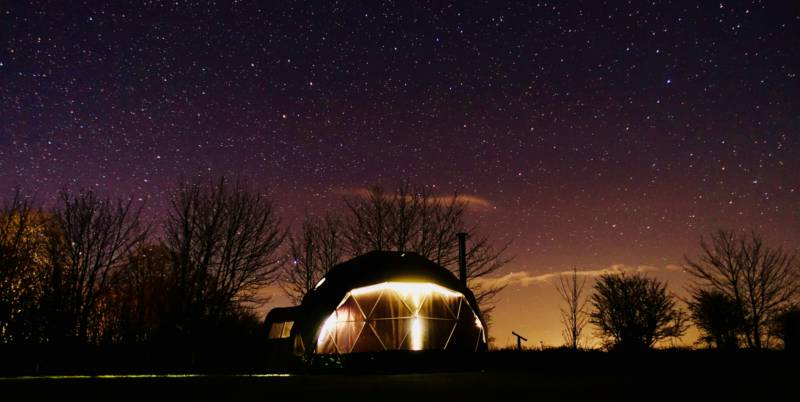 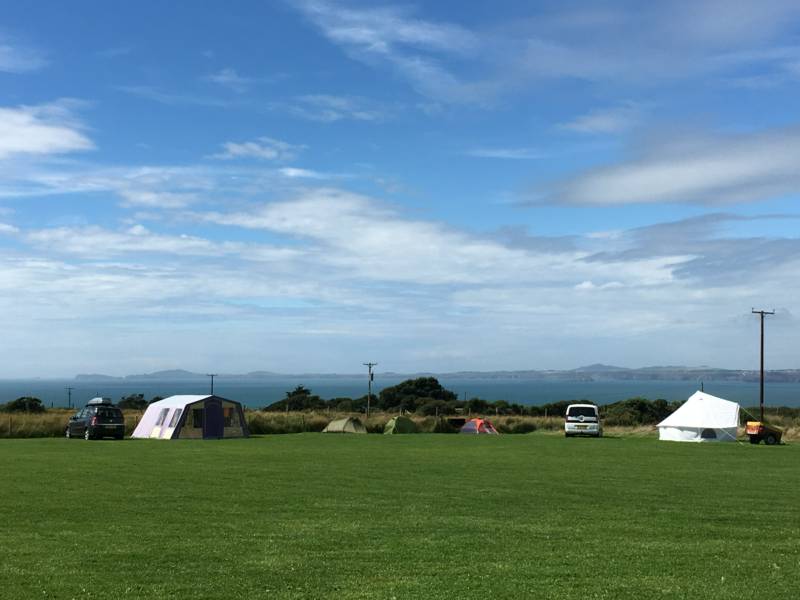 Tenby, Pembrokeshire, South Wales
Apple Camping, Redberth, Pembrokeshire SA70 8RX
Mongolian-style yurts in a meadow, a nine-seater glamping aeroplane - plus a saucer-shaped UFO coming down to earth in 2018.
Yurts and quirks in a Pembrokeshire meadow, where there's a couple of aeroplanes, a UFO and a giant PacMan-themed glamping pod to discover 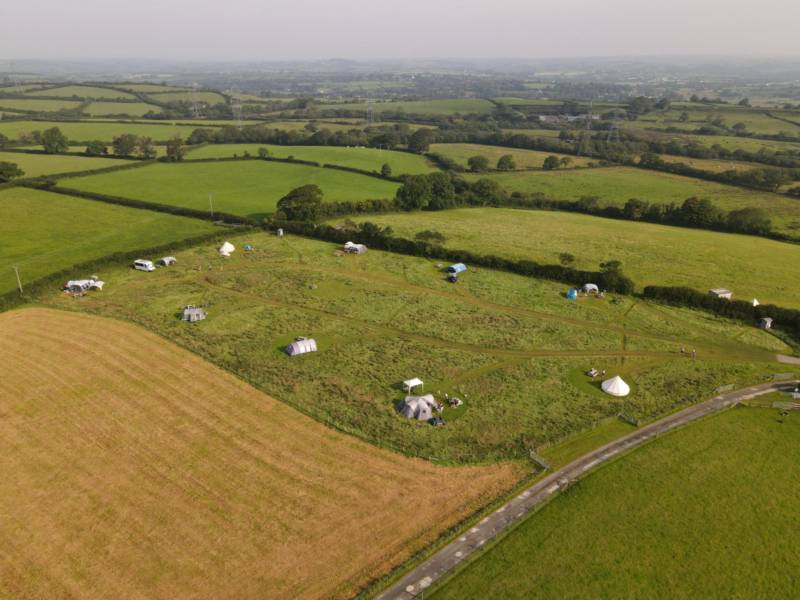 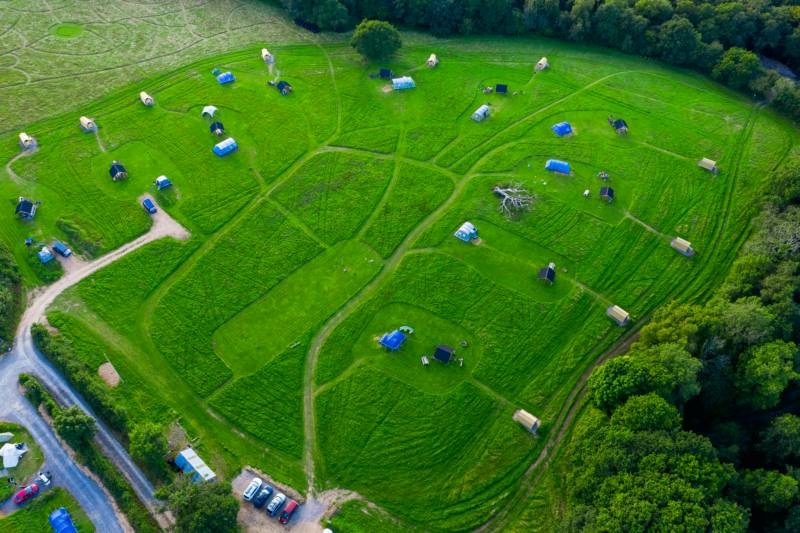 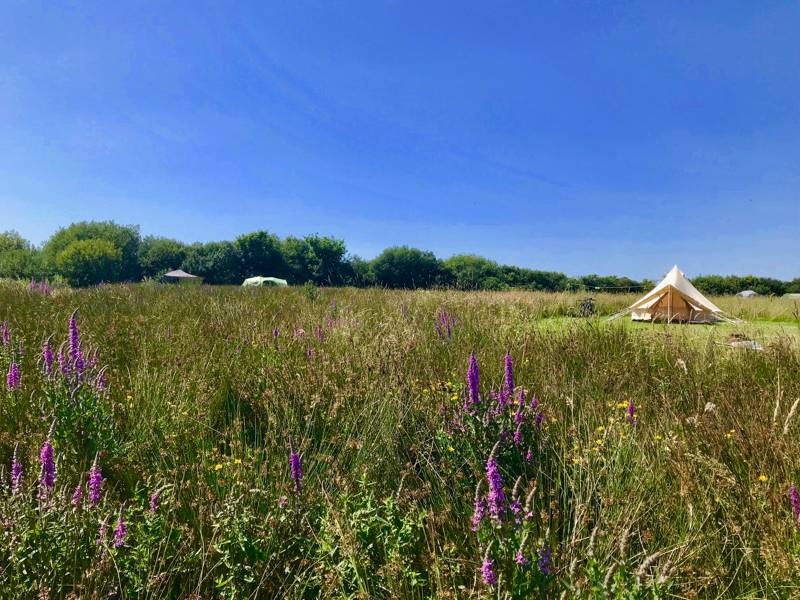