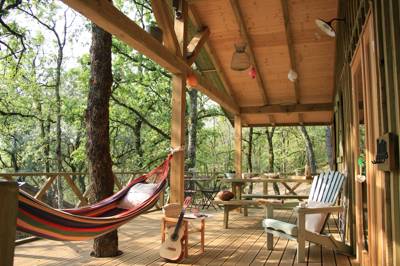 A collection of wooden glamping cabins and wooden cottages in the pretty, seven-acre grounds of a Dordogne château

Sophie and Pierre Nadin first opened their home to guests as a B&B, offering up a cute, stone-wall room inside one of the château’s old turrets. Explore the seven-acre grounds that sprawl beyond the classically shaped country home today, though, and you realise it was only a matter of time before they realised the true potential of Château de Termes lay not inside the property but in the lush, tree-dotted slopes that stagger down towards the River Tourmente beyond. This is, after all, one of the most revered locations in the Dordogne valley – 5km from the medieval settlement of Martel and equidistant from a trio of famous limestone caves – it’s a place to enjoy the great outdoors and the French summer sun. Glamping in the garden is where we’d prefer to be.

The resulting site that Sophie and Pierre have created spills from the main house (still a B&B) into the grounds of the former winery, with a collection of wooden cabins available to rent. In the height of summer (July and August) they’re available a week at a time and the rest of the year you can book them nightly, with sizes suited for two people to a family of five. The cabins very much echo the bed and breakfast vibe, with modern facilities and everything you need. You won’t be roughing it here. There are double beds and bunks, each in their own rooms within the cabin, and en suite washroom facilities with powerful showers and towels provided. There’s a well equipped kitchen and living space, while outside a wide, sun-deck stretches out on small stilts, a wonderful spot to sit and survey the surrounding greenery filled with mature trees and garden shrubbery.

Families will feel the real winners. From the tennis court, the swimming pool and the trampoline, to Tuesday fishing sessions on the Dordogne riverbanks and handling the glampsite’s farm animals, the list of things to do is pretty endless. Yet for all the facilities, Château de Termes still has a wonderfully informal air and the natural, long-established setting ensures it all has an intimate feel. The ping-pong table, the volleyball court, they’ve all been added to the campsite around the existing plants, rather than coming first. It means the scenery is still the focus and, after a day out exploring the medieval marvels of Martel and it’s quaint, half-timbered cafés or paddling a canoe down the Dordogne, Château de Termes remains, inside and out, the perfect place to retire to.

Each cabin has a covered terrace with garden furniture (deck chair, BBQ, table, chairs, hammock); a kitchen space with oven, microwave, dishwasher, fridge-freezer, toaster, kettle, hobs, washing machine, and crockery; and a living space with a sofa and TV. There's a 3-bed bedroom and an en suite double room, plus an independent toilet. The "cabanes" are not actually treehouses but are raised on piles and a have a lovely, high terrace. They feature very similar facilities to the other units (see website for complete details). Reception building with postcards, regional products, leaflets and brochures. Access to free Wi-Fi. Heated outdoor swimming pool and paddling pool (April–October), mini tennis court, basketball court, volleyball and badminton court, boules court, ping-pong, trampoline, pedal-kart circuit and a running track marked out around the house. A mini farm with hens and sheep. Tuesday fishing activities on the banks of the Dordogne (during summer).

Glamping only. So no tents, campervans or caravans.

You can organise hiking tours at reception. A day's hiking or mountain biking on the trails with picnic costs approxmately €16 per person. Potholing, climbing, canoeing, foie gras-making workshops and more can all be organised – just ask in reception. The medieval town of Martel is only 5km away, awash with good restaurants and cafés and characterised by half-timber homes, old stone buildings, wooden shutters and the town's seven towers. Start your visit in the main square, overlooked by the Palais de la Raymondi, an impressive belfry built between 1280 and 1330 and now home to the tourist office (+33 5 6533 2200) where you can pick up a map and plan your day. It's only a little further to Sarlat, Rocamadour and Beaulieu sur Dordogne, arguably the prettiest towns in France and all within a half hour drive of the campsite. There's also a trio of famous limestone caves nearby, carved by the waters feeding into the Dordogne – Grottes de Lacave (+33 5 6537 8703), Gouffre de Padirac (+33 5 6533 6456) and caves of Presques (+33 5 6540 3201).

Château de Termes has its own licensed bar with local produce and an evening bread ordering service for the next morning (left on your terrace at 8am). There are also weekly campsite BBQs, where everyone brings a picnic and gathers around the campfire with aperitifs on offer. For everything else, drive the 5½ km to Martel where there's a handful of good restaurants and a big Intermarché supermarket (on the edge of town) where you can stock up your cabin kitchen.

Leave Martel, following the D803 towards Vayrac. After 4km take the left hand turning where a tourist sign points you towards Château de Termes. Follow the road which will lead you to the site. The nearest train station is less than 2km away. It is an SNCF station – Saint-Denis-lès-Martel (+33 5 6532 4208) – and from there you can walk to the campsite. If the owners are around they will often be able to pick you up, so call in advance. 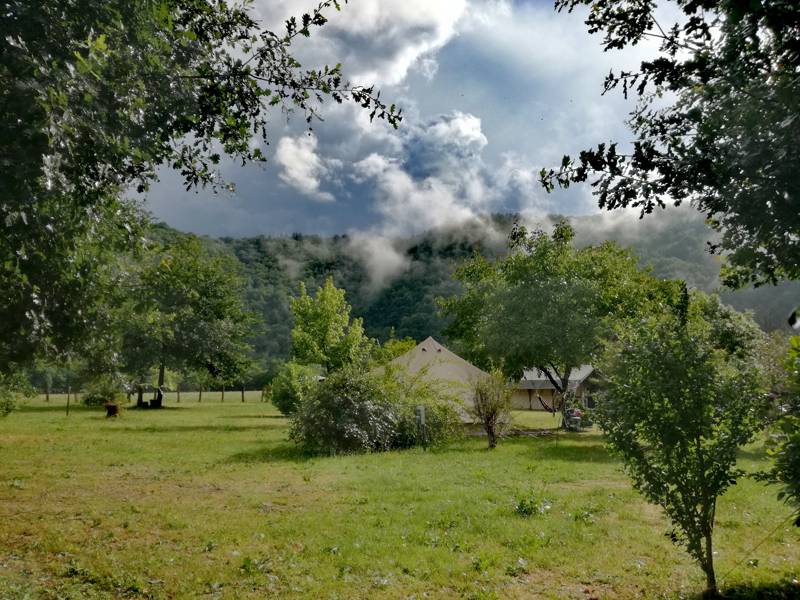 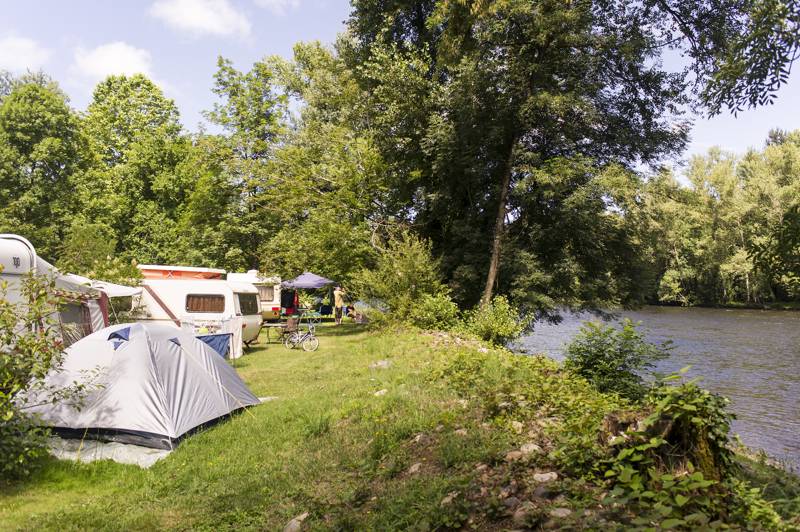