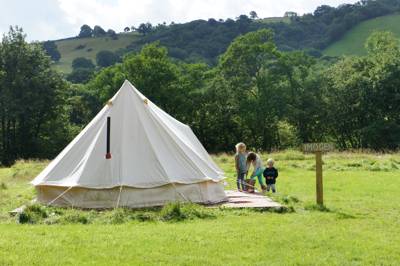 In the tiny village of Cwmdu, there’s a small, honey-coloured building that has been at the heart of the community since the moment it was built back in the early 1820s. The uneven walls run from one terraced section across to the next, connecting a whole row that has, through the years, boasted each and every trade a village could need: It’s been a post office, a grocery store, master tailors and linen draper and, off course, a village pub. Indeed, in the 1860s, it was all of these things at the same time.

Today, Cwmdu Inn, owned by the National Trust and run by the community, retains its essential character – low interior beams, an old inglenook fireplace and a cluster of tables with room for just 17 people – while the home-brewed beers they used to craft in the back room have been replaced by award winning local ales. Those with a nose for a proper old pub won’t be disappointed. And neither will avid campers. For years people have been posting across the internet – where’s the nearest campsite? Is there anywhere to camp near Cwmdu? Does the Cwmdu Inn have a campsite? Finally, a happy ‘yes’ is the answer. And what a campsite it is.

Run by Tom and Lisa Corcoran (and their amiable dog Ambrose), Wild Mountains Campsite is not actually owned by the Inn but, set in the meadow directly opposite, the two remain very much connected. In fact, it’s not exactly a campsite either. Just four pre-pitched, fully-furnished bell tents make up the on site offering, so you can’t simply rock up with your own tent or campervan, and inside each you’ll find proper mattresses, bedding and a wood-burner provided. This is camping in comfort and the small scale of the place lends it a real privacy that helps preserve the total tranquility of the area. It’s appropriate given the size of the tiny settlement. On the edge of a designated Dark Sky Reserve it’s also blessed with the darkest and starriest of night skies, so some time set aside for stargazing is a must.

From your tent there’s ample space for little’uns to go exploring. Mature trees and hedgerows hug the meadow in a green embrace, while the River Dulais skirts along one side. On a hot day, children delight in dabbling along its edges building makeshift dams. Though, it’s not exclusively a child's activity. Ruined Talley Abbey is also within walking distance – a fair trek but a pleasant, countryside route – and by car there are a wealth of castles and heritage attractions in the vicinity. As the name suggests, though, it’s the rural, remote aspect of this campsite that is the real appeal. The Black Mountain and Llyn Y Fan Fach lake in the nearby Brecon Beacons National Park awaits any would-be explorer, with long days in the outdoors only accentuating the pleasures of the cosy pub at the end. It's a ready-made itinerary that never gets old.

There are several excellent walks directly from the campsite (bring an OS map to make the most of the area). These include a 40-minute stroll up to the ruin of Talley Abbey and a jaunt around Talley Lakes and Nature Reserve. Dinefwr Castle and Carreg Cennen Castle (01558 822291) are both less than 30 minutes away by car and the National Botanic Gardens of Wales (01558 667149) are also 30 minutes away. For something a little more high-octane, mountain biking in Brechfa Forest offers trails for various levels of ability – including some serious stuff for the pros!

Hamper options for guests filled with local produce are available. The pub is open Wednesday–Saturday, with food served on Saturdays. Beer is mainly supplied from the Llandeilo based Evan Evans brewery with a range of award winning ales and there are guest ales from other local breweries on occasions as well as a great selection of ciders. Cwmdu shop and post office stocks local produce, open Tuesday–Saturday (mornings only). Head to Llandeilo for more options. Gin specialist, Ginhaus (01558 823030) is excellent if you like a good G&T, but also have top food in their deli, while Cawdors (01558 823500) hotel is top of the tree for fine dining. There's also a popular chocolate and ice-cream parlour – Heavenly (01558 822800). For a hearty Sunday lunch head to The Plough (01558 823431) in Rhosmaen.

Peaceful, private and perched in a meadow just outside a pleasant village pub, Wild Mountains is only wild when you want it to be. The stream, the mountains and the wildlife are all out there, of course, but each bell tent has plenty of homely comforts too.

Tom, Lisa & their dog Ambrose have always been at their happiest in the country, originally from Carmarthenshire, they love camping, especially glamping! Wild Mountains is a dream of theirs to share their love of the outdoors, nature and adventure with everyone. Set in the vibrant village of Cwmdu, with its community run shop, pub and restaurant there is everything anyone would possibly need for the perfect get away to the country. If you are dreaming about escaping and reconnect with nature, family and friends or just yourself then this is the adventure you need.
(Due to poor signal at Wild Mountains it's advisable to email)
Read More 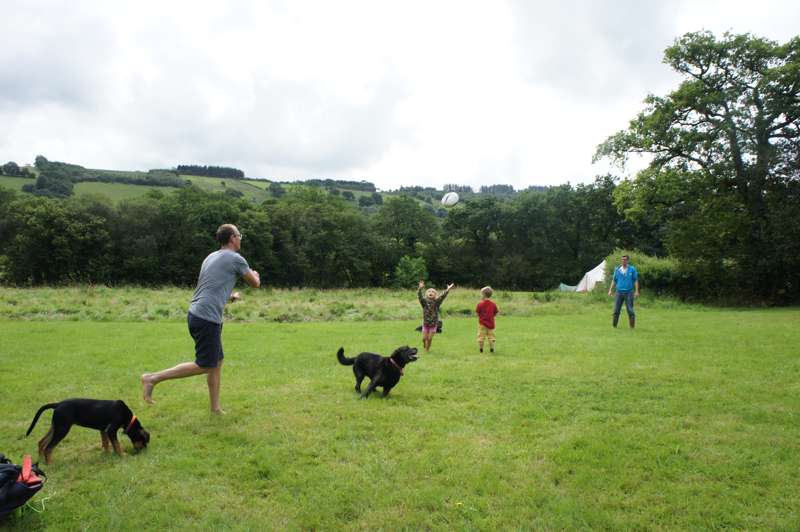 i
Evelyn is one of our 5m tents. Perfect for a group of friends or a family. Sleeps up to 4.

Bell tent Sleeps 4
Evelyn is one of our 5m tents. Perfect for a group of friends or a family. Sleeps up to 4.
Select Dates or Read More 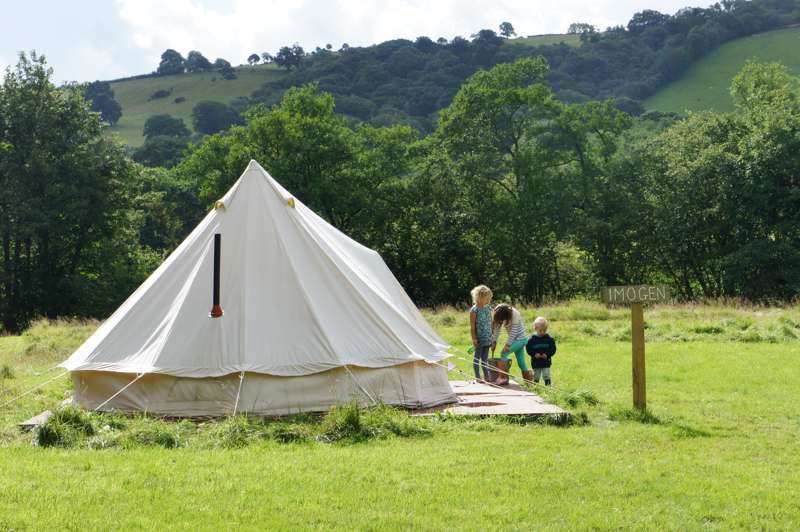 i
Imogen is one of our 5m tents. Perfect for a group of friends or a family. Sleeps up to 3.

Bell tent Sleeps 4
Imogen is one of our 5m tents. Perfect for a group of friends or a family. Sleeps up to 3.
Select Dates or Read More 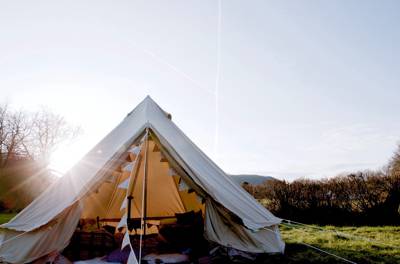 i
Maggie is one of our 4m tents. Perfect for a group of friends or a family. Sleeps up to 3.

Bell tent Sleeps 3
Maggie is one of our 4m tents. Perfect for a group of friends or a family. Sleeps up to 3.
Select Dates or Read More 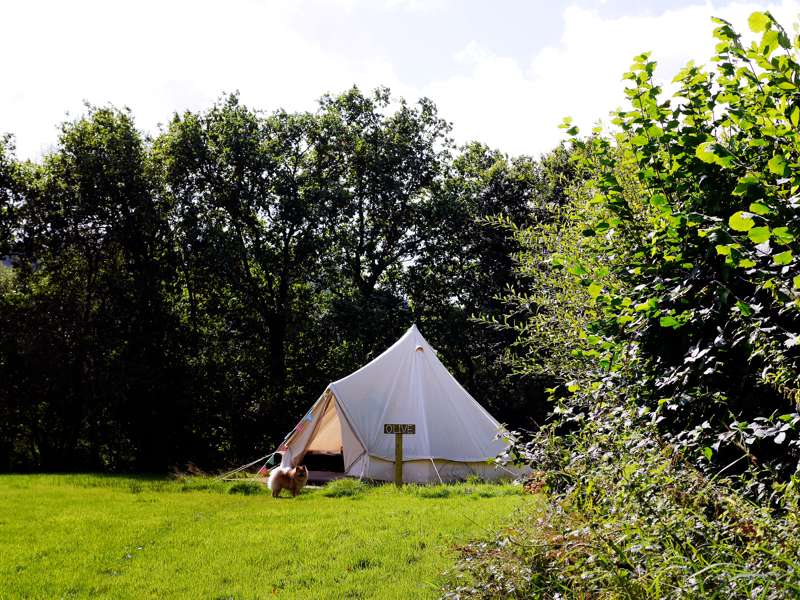 i
Olive is the largest of our bell tents at 5m. Perfect for a group of friends or a family. Sleeps up to 4.

Bell tent Sleeps 4
Olive is the largest of our bell tents at 5m. Perfect for a group of friends or a family. Sleeps up to 4.
Select Dates or Read More
Show more
Check Availability

From the M4 - Remain on the M4 past Bridgend, Port-Talbot and Swansea for 46.8miles. At the next roundabout called Pont Abraham follow signs for Carmarthen, A48, then Cross Hands. Once at Cross Hands, at the roundabout take the fourth exit sign posted Llandeilo A476, stay on this road for roughly 7miles, until you get to a small town called Fairfach. At Fairfach take the first exit on the roundabout towards Llandeilo A483. Drive through Llandeilo and at the roundabout take the second exit then the next left on to Talley Road B4302. Remain on this road for roughly 5 miles where you will see a sign for Cwmdu Village (Left hand turn). Follow the sign and road for 1 mile around and you will arrive at Cwmdu Village Pub. The Wild Mountains site is situated past the pub, follow the sign down an access track for 100m and take a right into the site parking area. 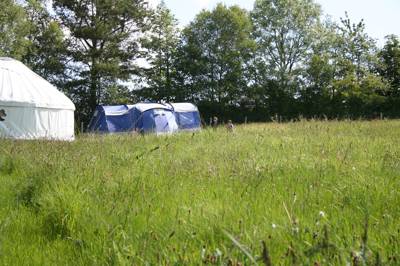 Spy real, live dragonﬂies dancing over lily-rich ponds as you head out in search of sleepy dragons in the wooded wonderland at this quiet eco site 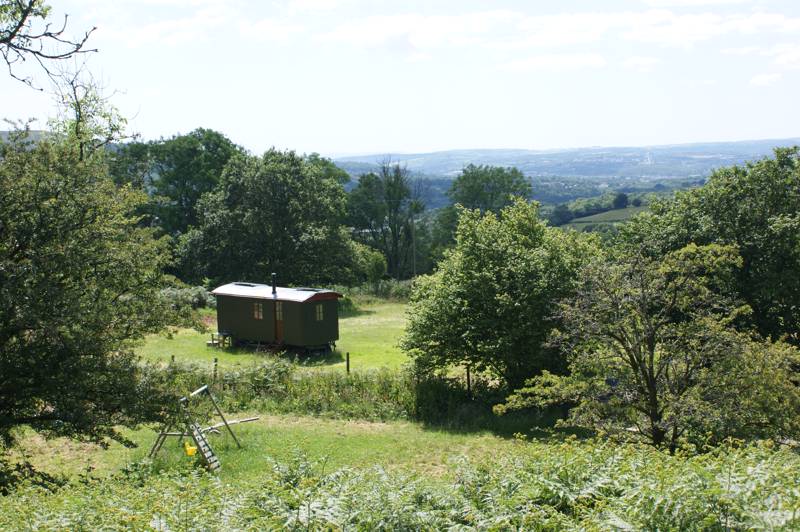 A trio of shepherd's huts on a charming family farm, set amid Wales' dramatic Black Mountains 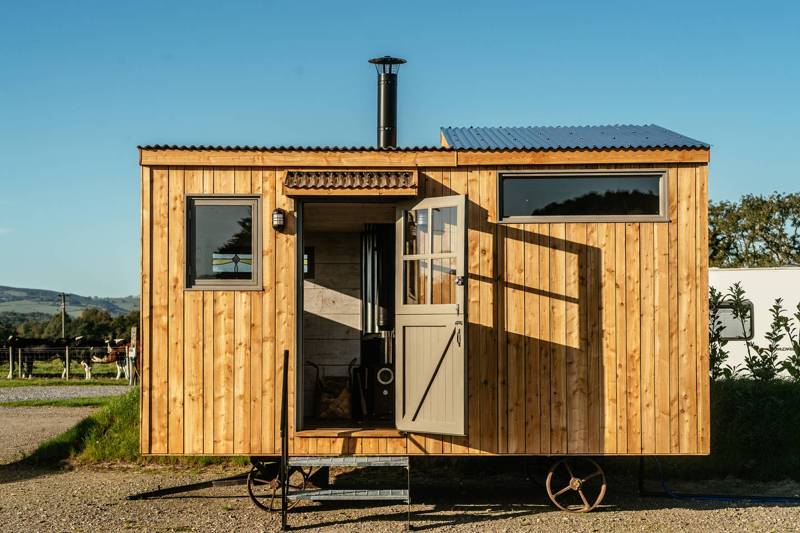 Book with confidence at The Tiny House with our Coronavirus Booking Guarantee - read full terms here. 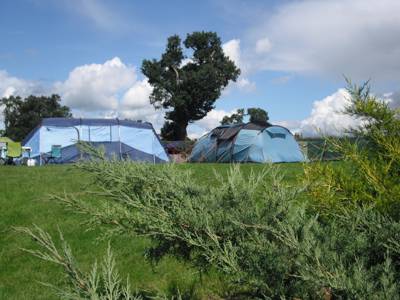 Camping and luxury riverside pods with spanking-clean facilities, including award-winning loos and heated amenities. All set in a quiet little site snuggled up to the Brecon Beacons. 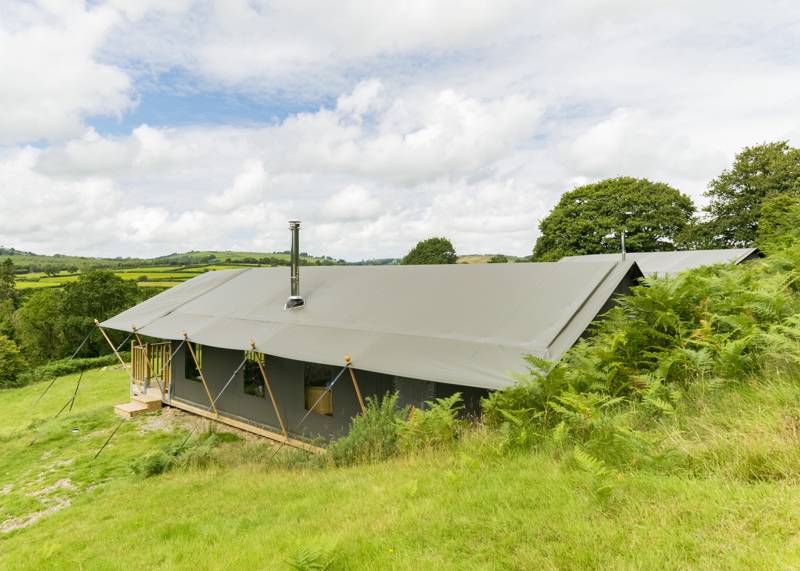 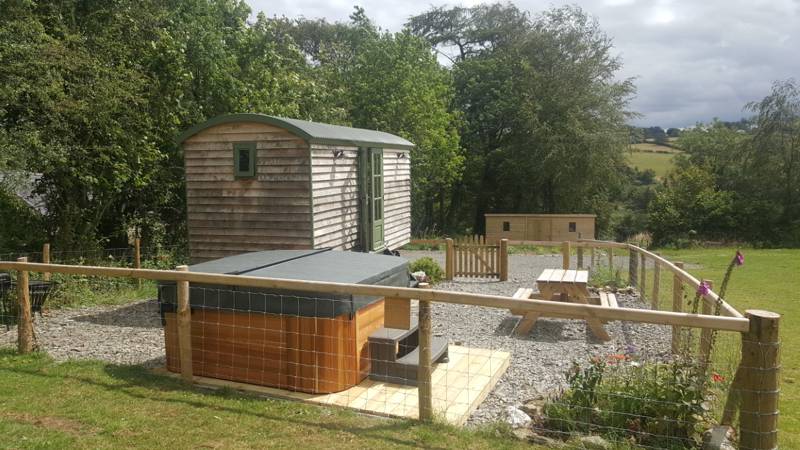 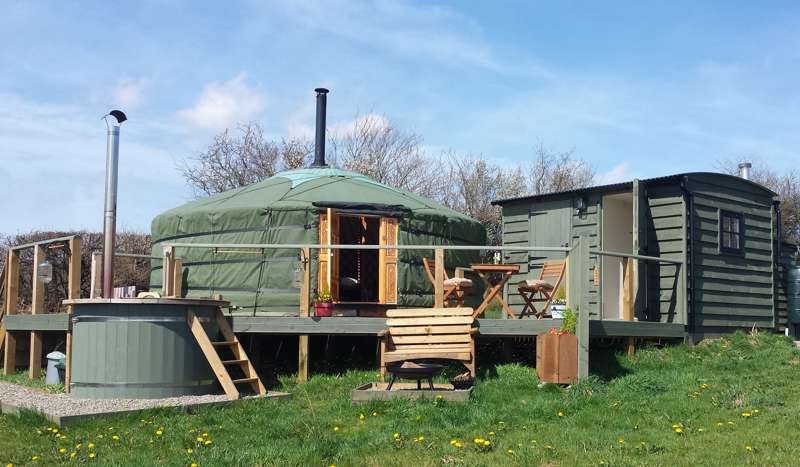